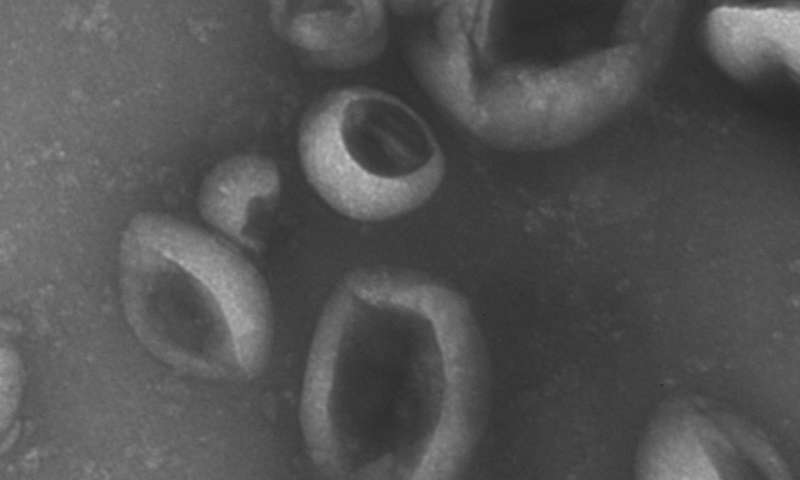 Idiopathic pulmonary fibrosis (IPF) is an incurable lung disease of unknown origin with limited treatment options. Research suggests that the signaling molecule WNT5A plays a key role in the pathogenic process. Now, a group of scientists from Helmholtz Center Munich, working with colleagues from the University of Denver, have taken a further step toward uncovering the mechanisms responsible for the development of fibrosis: IPF is associated with the increase of extracellular vesicles that relay WNT5A signals to cells in the lungs. The study, published in the American Journal of Respiratory and Critical Care Medicine, proposes a further pharmacological biomarker and a possible therapeutic approach.

Pulmonary fibrosis is associated with the increased formation of connective tissue in the lungs, resulting in scarring (fibrosis) of functional lung tissue. This leads to a decrease in the inner surface of the extremely fine alveoli and the extensibility of the lungs, which, in turn, impedes the intake of oxygen and the release of carbon dioxide. The result is impaired lung function. IPF is a particularly aggressive form of the disease that cannot be attributed to a specific cause. The symptoms worsen rapidly. Existing drugs can slow progression of the disease, but are unable to stop it permanently.

Research therefore focuses on the mechanisms underlying the pathological tissue changes associated with IPF. One approach that has been intensively pursued for several years now in the Department of Lung Repair and Regeneration (LRR) and the Institute of Lung Biology and Disease (ILBD) at Helmholtz Center Munich aims to influence the so-called WNT signaling pathway. It is already known that the signaling molecule WNT5A is responsible for stimulating the proliferation of connective tissue cells in the lungs.

The LRR Research Group headed by Dr. Melanie Königshoff has found that extracellular vesicles are very likely also involved in IPF. “Simply put, extracellular vesicles are tiny pouches released by cells that can contain a large number of messenger substances, such as proteins and nucleic acids,” describes Dr. Mareike Lehmann, one of the authors of the study. “They are an important means of communication between cells and organs and help to ensure that the substances reach completely new sites.”

Until recently, it was unclear whether and how extracellular vesicles are implicated in IPF. “We were able to show in the study that increased levels of extracellular vesicles occur in IPF patients, which then act as carriers of WNT5A,” explains lead author Aina Martin-Medina. “We were also able to confirm these results in our experimental model.” In addition, the authors showed in Petri dish experiments that reducing the number of vesicles decreases tissue scarring.

In further preclinical studies, the researchers now want to examine the suitability of extracellular vesicles as a pharmacological biomarker, as well as a possible therapeutic target.