In order for a tumour to grow, its cells need to communicate with one another. Disrupting this communication can help to fight the tumour. The research group headed by Dr. Meike Saul at Technical University of Darmstadt has discovered a mechanism that plays a key role in intercellular communication in tumours. This discovery could act as the basis for the development of innovative therapies in the fight against lung cancer.

All cells in a multicellular organism must be precisely coordinated in order for the organism to function correctly. This applies both to healthy tissue and also tumours. Communication between the cells is extremely important and is achieved via direct cellular contact or using messenger substances. Recent studies have also shown that cells emit extracellular vesicles – so-called exosomes with a size of 50 to 200 nanometres – into the surrounding environment that play a key role in intercellular communication.

For a long time, these vesicles were not considered to have much biological significance. It was assumed that the cells used them to dispose of unnecessary molecules. We now know that these vesicles are fundamentally important for the regulation of different physiological processes and illnesses such as cancer.

In cellular communication, microRNA (miRNA) in exosomes plays a particularly important role. MicroRNAs are small ribonucleic acid molecules that play a key role in the regulation of gene expression and cellular protein synthesis. 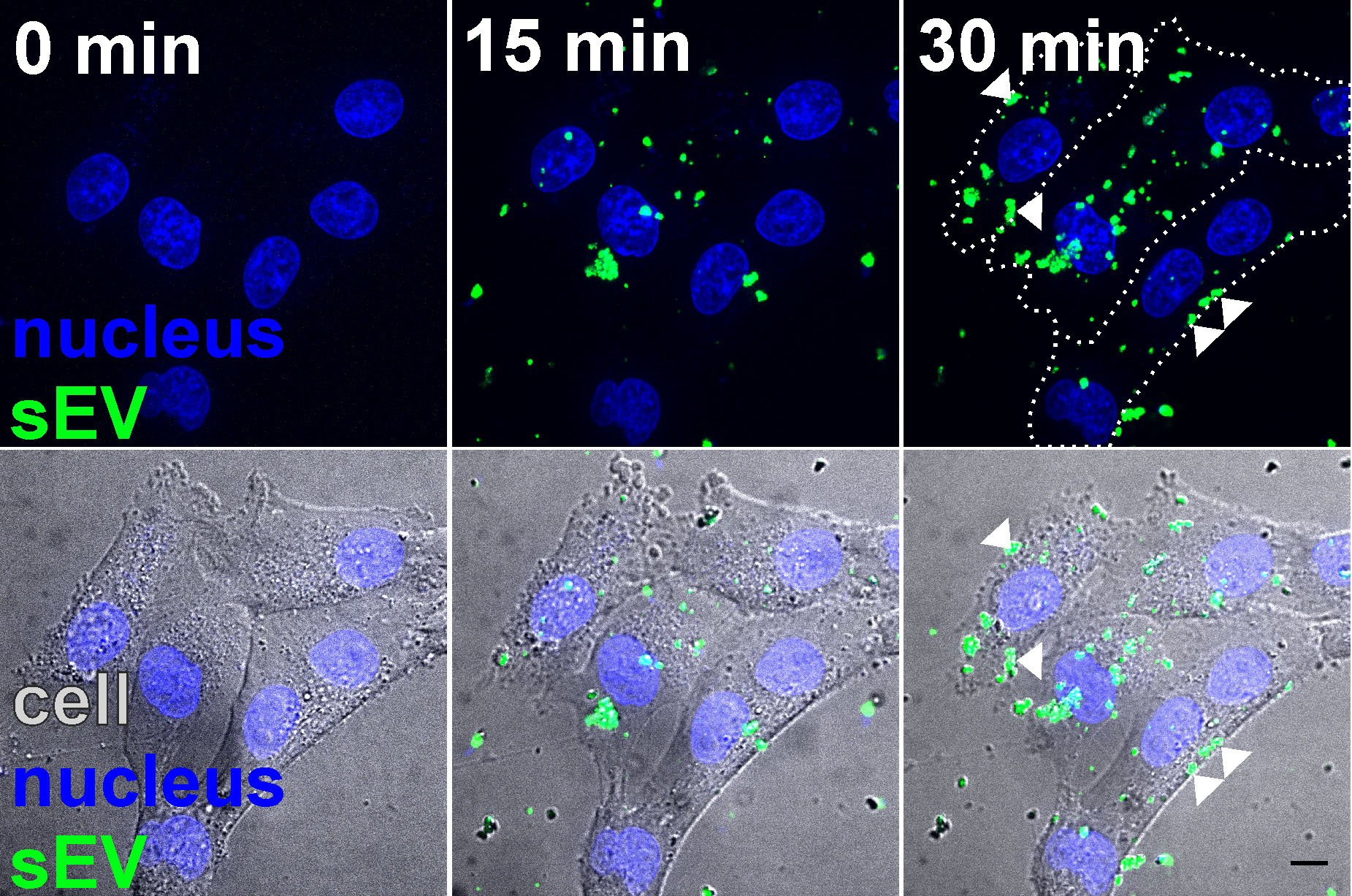 The research group headed by Dr. Meike Saul in the Department of Biology at the Technical University of Darmstadt is investigating the physiological functions of these exosomal miRNA and recently had great success in their research into lung cancer. Lung cancer is one of the leading causes of cancer-related death around the world. Non-small cell lung cancer (NSCLC) is the most common type of lung carcinoma and accounts for about 80 percent of all cases.

It is known that most cases of non-small cell lung cancer are associated with an overexpression of the pro-inflammatory lipid mediator prostaglandin E2 (PGE2) which strongly promotes tumour growth. The extent to which tumour and inflammation-promoting lipid mediators influence the communication between cells via exosomes had not been investigated up to now. Saul, her scientific assistants Dr. Julia Donzelli and Eva Pröstler as well as other researchers at TU Darmstadt, the University of Gießen and the Karolinska Institute (Stockholm/Sweden) were able to demonstrate for the first time in this study that PGE2 significantly increases the exosomal secretion of microRNA miR-574-5p in lung cancer cells.

In addition, the team discovered that miR-574-5p transported in exosomes activates an immune receptor that lowers PGE2 levels. This function in exosomes differs from the function of intracellular miR-574-5p, which initiates PGE2 biosynthesis. The study showed that a combination of intracellular and exosomal miR-574-5p controls PGE2 levels via a feedback loop. This suggests that it may be possible to use this finding to influence tumour growth.

There are various subtypes of non-small cell lung cancer. In one of the most common types, adenocarcinoma, the researchers discovered that exosomal miR-574-5p had an influence on PGE2 biosynthesis. The research team headed by Saul suggests that this is due to the unique composition of the various proteins on the exosomal surface.

In this study, Saul and her colleagues were able to show for the first time that the function of a miRNA within a cell can be the exact opposite of its function in the exosome. Depending on the uptake mechanism, an exosomal miRNA can be released at different locations within a cell, which can decisively influence the function of the miRNA.

This newly discovered relationship between miR-574-5p and PGE2 opens up new therapeutic possibilities for lung cancer.

“The results will act as the basis for the development of innovative and personalised therapies,” explains Saul. “Combining standard cancer therapies with inhibitors against PGE2 synthesis is a very promising treatment strategy.”

“Unfortunately, the tumour-inhibiting effect of PGE2 inhibitors was not observed in all of the tumour patients,” says Saul.

Saul believes that this is due to the individual PGE2 synthesis rates of the patients. The aim is thus to find a biomarker that identifies those patients who could benefit from the administration of PGE2 inhibitors (stratification marker).

“miR-574-5p could be used as a tumour and stratification marker to select lung tumour patients who are likely to respond to the pharmacological inhibition of PGE2 biosynthesis. We are currently conducting a clinical study to further validate our hypothesis,” says Saul.