Milk exosomes are a rich source of microRNAs (miRNAs) that are protected from degradation. Ingestion of milk and subsequent absorption of miRNAs into recipient cells by endocytosis may play a role in the regulation of neonatal innate and adaptive immunity. In contrast, the miRNA content of milk exosomes may also be indicative of a lactating animal’s health; whereby, the presence or absence of specific miRNAs could serve as biomarkers for early detection of bacterial infection that can lead to mastitis.

Researchers from the USDA-ARS analyzed and compared miRNA expression profiles of milk exosomes from four Holstein cows obtained during mid-lactation prior to and after infection (48 h) of the mammary gland with Staphylococcus aureus.

Their survey of miRNA expression from uninfected milk exosomes and those produced in response to infection provides new and comprehensive information supporting a role for delivery into milk of specific miRNAs involved in immune response. In particular, bta-miR-142-5p, and -223 are potential biomarkers for early detection of bacterial infection of the mammary gland. Additionally, 22 mammary-expressed genes involved in regulation of host immune processes and response to inflammation were identified as potential binding targets of the differentially expressed miRNAs 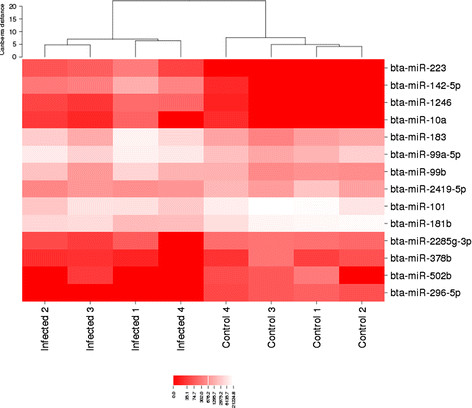