Researchers from the University of Nebraska Medical Center isolated and characterized EVs from the brains of rhesus macaques, both with and without simian immunodeficiency virus (SIV) induced central nervous system (CNS) disease.

Indeed miR-21 in EV activates TLR7 in a reporter cell line, and the neurotoxicity is dependent upon TLR7, as neurons isolated from TLR7-/- knockout mice are protected from neurotoxicity. Further, the researchers show that EVs isolated from the brains of monkeys with SIV induced CNS disease activates TLR7 and were neurotoxic when compared to EVs from control animals. Finally, they show that EV-miR-21 induced neurotoxicity was unaffected by apoptosis inhibition but could be prevented by a necroptosis inhibitor, necrostatin-1, highlighting the actions of this pathway in a growing number of CNS disorders. 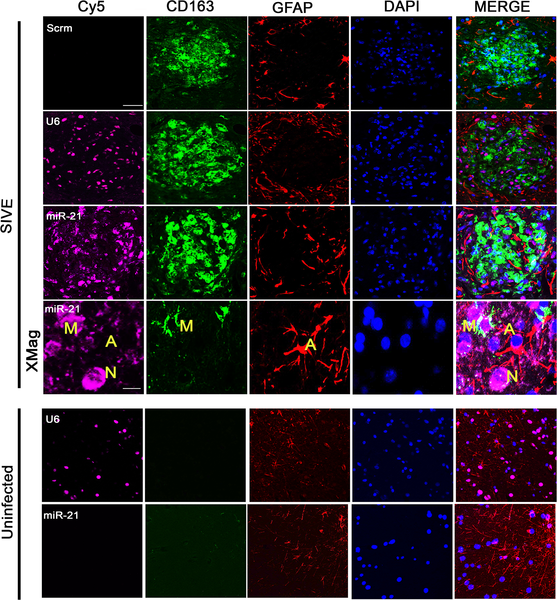 Combined FISH and IF for miR-21, CD163 and GFAP. In SIVE brain sections containing macrophage/microglial nodules, miR-21 (magenta) partially colocalized with the macrophage/microglia marker CD163 (green). No colocalization was observed with GFAP (red), an astrocyte marker. DAPI (blue) was used to label nuclei; a scrambled miRNA probe (Scrm) was used as negative control for hybridization; and U6 probe (a non-coding snRNA) was used as a positive control. Scale bars = 20 μm for all panels except 5 μm for SIVE-Mag panels.