miR-34a is an intracellular and exosomal predictive biomarker 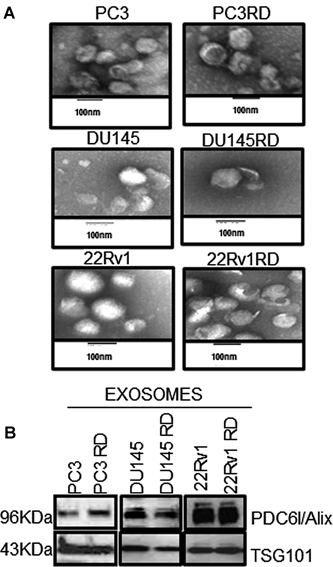 Following global miRNA profiling of cell line models of docetaxel-resistance and their corresponding exosomes, the researchers investigated the clinical relevance of four selected miRNAs (miR-598, miR-34a, miR-146a, miR-148a) in four publically available clinical cohorts representing both primary and advanced disease in tissue and urine specimens. One of these miRNAs, miR-34a was selected for functional evaluation by miRNA inhibition and over-expression in vitro. They further assessed the panel of miRNAs for their combined clinical relevance as a biomarker signature by examining their common predicted targets.

A strong correlation was found between the detection of miRNAs in exosomes and their corresponding cells of origin. Of the miRNAs chosen for further validation and clinical assessment, decreased miR-34a levels showed substantial clinical relevance and so was chosen for further analysis. Manipulating miR-34a in prostate cancer cells confirms that this miRNA regulates BCL-2 and may, in part, regulate response to docetaxel. When combined, these miRNAs are predicted to regulate a range of common mRNA targets, two of which (e.g., SNCA, SCL7A5) demonstrate a strong relationship with prostate cancer progression and poor prognosis.

This study supports the extracellular environment as an important source of minimally invasive predictive biomarkers representing their cellular origin. Using miR-34a as example, we showed that biomarkers identified in this manner may also hold functional relevance.