Because exosomes have gained attention as a source of biomarkers, we investigated if miRNAs in exosomes (exo-miRs) can report the disease progression of organ injury. Using rat renal ischemia-reperfusion injury (IRI) as a model of acute kidney injury (AKI), University of Miyazaki researchers determined temporally-released exo-miRs in urine during IRI and found that these exo-miRs could reliably mirror the progression of AKI. From the longitudinal measurements of miRNA expression in kidney and urine, they found that release of exo- miRs was a regulated sorting process. In the injury state, miR-16, miR-24, and miR-200c were increased in the urine. Interestingly, expression of target mRNAs of these exo-miRs was significantly altered in renal medulla. Next, in the early recovery state, exo-miRs (miR-9a, miR-141, miR-200a, miR-200c, miR-429), which share Zeb1/2 as a common target mRNA, were upregulated together, indicating that they reflect TGF-β-associated renal fibrosis. Finally, release of exo-miRs (miR-125a, miR-351) was regulated by TGF-β1 and was able to differentiate the sham and IRI even after the injured kidneys were recovered. Altogether, these data indicate that exo-miRs released in renal IRI are associated with TGF-β signaling. Temporal release of exo-miRs which share targets might be a regulatory mechanism to control the progression of AKI. 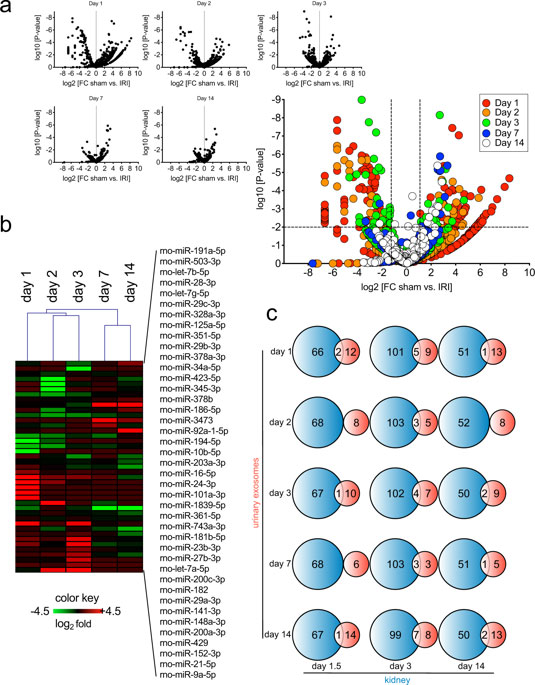 Tagged with: University of Miyazaki

APE1 shRNA-loaded cancer stem cell-derived extracellular vesicles reverse Erlotinib resistance in non-small cell lung cancer via the IL-6/STAT3 signalling
23 May 2022
Plasma antibodies from humans infected with zoonotic simian foamy virus do not inhibit cell-to-cell transmission of the virus despite binding to the surface of infected cells
23 May 2022
Function and therapeutic development of exosomes for cancer therapy
23 May 2022
HBV induced the discharge of intrinsic antiviral miRNAs in HBV-replicating hepatocytes via extracellular vesicles to facilitate its replication
23 May 2022
Muscle-Derived Beige Adipose Precursors Secrete Promyogenic Exosomes That Treat Rotator Cuff Muscle Degeneration in Mice and Are Identified in Humans by Single-Cell RNA Sequencing
23 May 2022
Candida albicans Hyphal Extracellular Vesicles Are Different from Yeast Ones, Carrying an Active Proteasome Complex and Showing a Different Role in Host Immune Response
23 May 2022
Surface Engineering of Lipid Vesicles Based on DNA Nanotechnology
23 May 2022
Low-dose IL-2 prevents murine chronic cardiac allograft rejection: Role for IL-2-induced T regulatory cells and exosomes with PD-L1 and CD73
23 May 2022