Researchers at the Centro Nacional de Investigaciones Cardiovasculares Carlos III (CNIC) have provided valuable information about the defense mechanisms of the immune system during the early stages of the response to pathogens such as viruses and bacteria. The research findings, published today in Nature Communications, contribute to the understanding of the cellular processes initiated at early stages and explain how the distinct cell populations of the immune system communicate to mount an effective response against pathogens.

The CNIC researchers have shown that mitochondrial DNA contained in nanovesicles triggers a state of alertness in recipient cells that activates an antiviral genetic program. These nanovesicles, known as exosomes, are produced by T lymphocytes and taken up by dendritic cells via intercellular contacts. 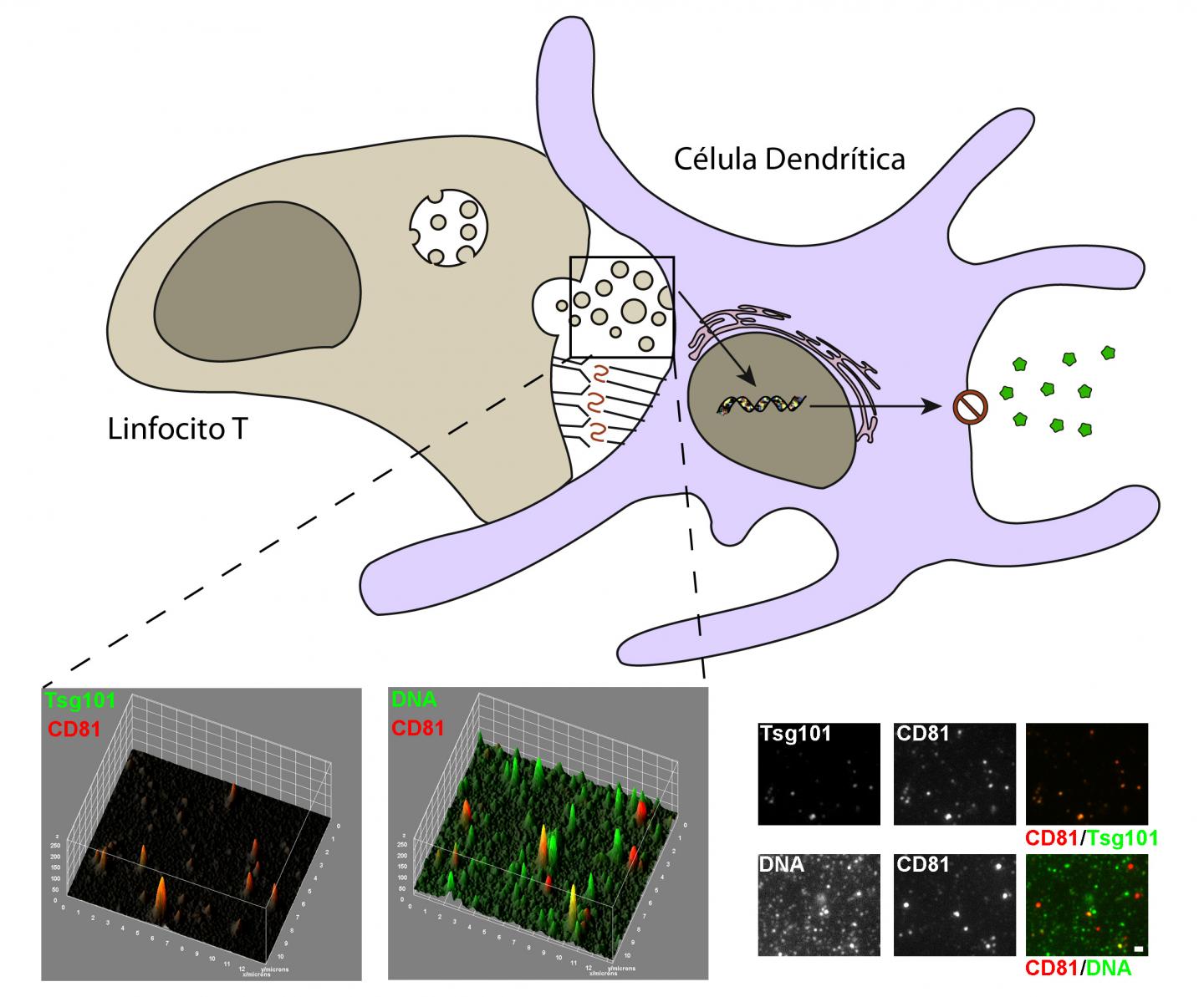 The immune response against pathogens requires the specific physical interaction between T lymphocytes and antigen presenting cells, especially dendritic cells, through the formation of an immune synapse. During this process, the cells exchange information both through receptor-ligand contacts at the cell surface and through the transfer of exosomes.

Research to date has focused on how the immune synapse activates signaling routes in the T cell; in contrast, the identity and effects of the signals received by dendritic cells have received relatively little attention. The present study was performed by the group led by Professor Francisco Sánchez-Madrid, principal investigator of the Intercellular Communication laboratory at the CNIC, head of the Immunology Service at the Hospital la Princesa, and Professor of Immunology at the Universidad Autónoma de Madrid. In previous work, the group demonstrated that T cells can transfer exosomes to dendritic cells during the formation of the immune synapse.

In the new study, the research team describe how these nanovesicles “transport DNA and proteins of mitochondrial origin,” explained Prof. Sánchez Madrid.

The DNA present in the nanovescicles is “directly responsable for the increased expression of antiviral genes via the cGAS/STING pathway, resulting in the detection of DNA outside of the cell nucleus.” As study author Daniel Torralba explained, “the imported DNA acts as an alarm that triggers the immune system to activate the antiviral response.” The study confirms that the acquisition of the exosomal contents induces “this expression of antiviral genes” that protects against viral infection.

This finding opens up a new perspective on the role of extracelular vesicles in the horizontal transfer of mitochondrial components.

The research team used animal models with distinct mitochondrial DNA genotypes, thus allowing the transfer of mitochondrial DNA to be tracked during the formation of the immune synapse. In the study, authors Daniel Torralba and Francesc Baixauli collaborated with other CNIC groups, including the group led by Professor José Antonio Enriquez and the Proteomics and Genomics units. The study also involved contributions from researchers from the Centro de Investigación CIMA in Pamplona and other Spanish centers.

The transfer of DNA in exosomes has a functional impact on the recipient cells. Exposure to exosomes of T-cell origin triggers alterations in the expression of around 1600 genes in dendritic cells, and many of these modified genes are involved in the protection against viral infection.

These discoveries contribute to the understanding of the cellular processes initiated during the immune synapse and of how components of the innate and adaptive immune systems communicate to mount an effective response to pathogens.