Doctors may be able to assess the survival rates of melanoma patients following the discovery of a molecule that allows the cancer to spread from the skin to other parts of the body.

University of Queensland researchers hope that targeting this molecule may offer a way to stop the cancer from spreading.

“Patients with high levels of RAB27A in their melanoma cells have a lower survival rate,” Professor Haass said. “So measuring RAB27A levels could become a new prognostic tool when assessing patients. This would enable patients with a poorer prognosis to be treated more aggressively, sooner.”

Professor Haass said metastasis, the ability of melanoma to spread within the body, was what made it so deadly.

Professor Haass noted that making RAB27A a target for new therapeutic treatments was not straightforward.

“It’s often difficult to target molecules like this directly,” he said. “But we’ve identified two binding partners of RAB27A. By blocking these, the molecule would potentially be unable to produce the invasive exosomes and the ability of melanoma to spread could be inhibited.” 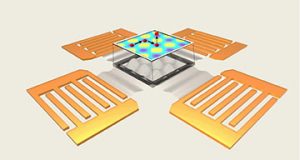 Discovery of a universal biomarker for exosomes