A comprehensive analysis led by researchers at Memorial Sloan Kettering has found that a large proportion of mutations found in liquid biopsies do not come from tumor cells, but rather from alterations in white blood cells.

Blood tests called liquid biopsies have raised hopes among doctors and patients that diagnosing and screening for cancer could be as simple as a blood draw. These sensitive genetic tests can identify cancer-related mutations in the bits of DNA that a tumor sheds into the bloodstream. Such tests have been used to monitor treatment responses in patients with metastatic cancer and to make diagnoses in patients where a biopsy of the tumor cannot be performed.

Yet, a new study led by MSK researchers and published in the journal Nature Medicine has found that most of these tests have a serious limitation: Many of the mutations detected are likely not coming from the cancer cells at all.

“We almost fell off our chairs,” says Jorge Reis-Filho, Chief of Experimental Pathology at MSK and the paper’s last author. “In many patients, the majority of mutations came from white blood cells, not cancer cells.”

Throughout life, blood cells are continually being replaced as they age and die. Stem cells in the bone marrow divide to produce new blood cells, and each time a cell divides, there is a chance that a mistake in DNA replication may occur. The high natural rate of cell division in stem cells means that mutations tend to accumulate, producing blood cell “offspring” that share these mutations, even though they aren’t cancer. This accumulation of mutations in blood cells is called clonal hematopoiesis.

Like tumor cells, these normal blood cells also shed DNA into the bloodstream. This includes DNA containing mutations stemming from clonal hematopoiesis, creating the potential for confusion: Doctors may think a mutation in the DNA is fueling cancer when it is actually not. The MSK team says the findings indicate the need for caution when interpreting results from liquid biopsies in which white blood cells are not sequenced at the same time.

Deducing the Source of Mutations

The study was based on genomic information from 124 people with metastatic breast, lung, or prostate cancer treated at MSK. These individuals gave blood and also had their primary tumor biopsied and sequenced using MSK-IMPACT, MSK’s DNA sequencing platform. The researchers tested each blood sample using the liquid biopsy, which is designed to detect mutations in 508 cancer-related genes in cell-free DNA (cfDNA). They also obtained white blood cells from the blood samples and sequenced the DNA inside those cells. With all this information, the researchers were able to determine which mutations in the blood came from the tumor and which came from white blood cells. They were also able to assess what percentage of the mutations found in the tissue biopsy sample could also be detected in the blood.

To their great surprise, more than half of the mutations identified in the cfDNA of people with cancer came from white blood cells, not from the cancer. This is a problem since most commercially available liquid biopsy tests do not include white blood cell testing.

“It is important to understand that even in cancer patients, a large proportion of the mutations found in the cfDNA originate from clonal hematopoiesis,” says Pedram Razavi, a physician-scientist in the Department of Medicine at MSK and the paper’s first author. “These mutations could potentially be interpreted as coming from the tumor if matched white blood cells are not also sequenced.”

“That is not to say that patients shouldn’t trust the results of these tests,” he adds. “What we’re saying, instead, is that the results need to be interpreted with caution by a physician who understands the limitations of the assay being used.”

Potential Use in Clinical Practice

When the researchers began this study four years ago, they had hoped that the 508-gene blood-based test, which is made by the company GRAIL, Inc., might be able to detect all of the cancer-related mutations that are present in a growing tumor. But that was not what they found.

Instead, the researchers found that, on average, the 508-gene test detected approximately three-quarters of all the mutations found in a tissue biopsy.

“Basically, we used the best, most sensitive DNA sequencing technology available for mutation detection in cfDNA, and found that in most patients we cannot detect all cancer mutations using this approach, even those with metastatic cancer,” Dr. Reis-Filho says.

On the other hand, the blood test detected mutations that sequencing of a tumor biopsy did not. “Because tumors are heterogeneous, a single tumor tissue biopsy may not capture the full spectrum of the mutations for the entire disease,” Dr. Razavi says. “Liquid biopsy can provide a more global picture of tumor mutations as all the tumor sites potentially contribute to the cfDNA pool in circulation.” 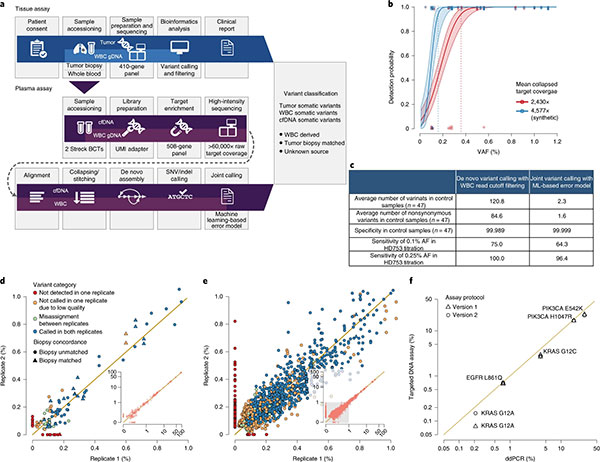 a, Tumor and cfDNA samples were collected from patients with MBC, NSCLC and CRPC. b, Analytical performance of the targeted DNA assay.  c, Estimated variant calling specificity using samples from controls without cancer and corresponding variant calling sensitivity  d, Comparison of allele fractions of variants detected using either of the two targeted DNA assay protocols in five patients. e, One patient with hypermutation and MBC was excluded from this analysis to avoid biased regression.  f, Comparison of VAFs measured using the targeted DNA assay (y axis) and ddPCR (x axis).

Limitations to the mutation-based approach like that used in this analysis have led GRAIL and others to focus on other approaches to early cancer detection.

Nevertheless, the study has valuable lessons for the field. “Previously, some researchers thought that any mutations detected in the blood that weren’t also detected in a tissue biopsy were just noise, an artifact of the sequencing technology,” Dr. Razavi says. “We now know that most of this ‘noise’ is actually due to clonal hematopoiesis.”

Although liquid biopsies will not replace tissue biopsies any time soon, they can still be very useful in caring for patients today, the scientists emphasize.

“Often, we would like to biopsy a tumor during treatment, but it’s not feasible,” says Bob Li, an MSK medical oncologist who specializes in treating people with lung cancer, and another lead author on the paper. “We cannot biopsy a patient every two months to see how the disease is evolving. Liquid biopsies could be a way around that problem. It’s a complementary tool.”