Particle-Based Approach Profiles Up to 68 miRNAs from Plasma, Serum, and Exosomes

MicroRNA (miRNA) profiling has tremendous potential for the diagnosis and prognosis of a broad range of diseases including cancer, cardiovascular disorders, and Alzheimer’s disease. Due to their stability in blood, miRNAs are ideal biomarkers; however, the full promise of miRNA profiling has yet to be realized, largely due to the limited throughput of existing validation technologies, lack of compatibility with samples containing PCR inhibitors, and errors introduced during sample preparation.

While there are several multiplexing technologies for miRNA detection, for either in-depth analysis of a few samples (e.g., sequencing) or analysis of a few targets over many samples (typically accomplished using manual qRT-PCR), no platforms currently exist that are ideally suited for the detection of numerous miRNAs over a large number of samples, as is required for the validation of clinical miRNA biomarkers. In addition, the implementation of clinical biomarker assays requires robust methods for sample preparation, typically consisting of specimen collection, RNA purification, and library preparation.

Another barrier is sample preparation, as methods currently used are not only prone to human error but can have profound effects on RNA yield, sample throughput, and miRNA profile. Furthermore, the presence of PCR inhibitors, such as heparin, may interfere with reverse transcription, rendering many of the qPCR or sequencing approaches unusable. Ideally, miRNAs would be detected directly from clinical samples with no RNA purification using an approach that minimizes or eliminates the effects of PCR inhibitors. 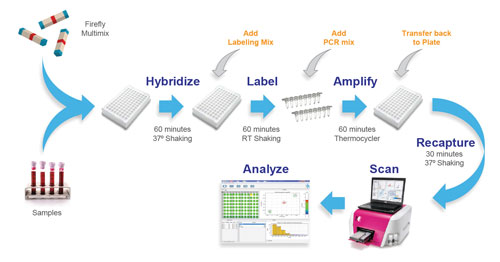 The Multiplex Circulating miRNA Assay using Abcam’s FireflyTM Technology was developed to address the needs for miRNA biomarker validation, enabling direct detection of up to 68 miRNAs of choice with PCR sensitivity from crude biofluids including serum, plasma, and exosomes. The platform uses barcoded hydrogel particles to provide researchers with a miRNA profile in every well.

The workflow for the Multiplex Circulating miRNA Assay is simple, consisting of capturing, labeling, amplifying, and recapturing small RNAs for highly sensitive and robust detection (Figure 1). After capture, labeling and amplification of target miRNAs, assay readout is performed using a standard flow cytometer. Data files from the cytometers are interpreted with the Firefly Analysis Workbench software for analysis and export.