from Nanowerk by Michael Berger –

Early and accurate detection of cancer is critical for successful cancer therapies. In most cases, a tissue biopsy is the initial means of making a diagnosis. With increasing accuracy, liquid biopsies – where circulating tumor cells (CTCs) are isolated from blood samples – are becoming a viable complement or even alternative to invasive biopsies of metastatic tumors.

Reporting their work in the September 29, 2016 online edition of Nanotechnology (“Static micro-array isolation, dynamic time series classification, capture and enumeration of spiked breast cancer cells in blood: the nanotube–CTC chip”), Balaji Panchapakesan and his collaborators in the Department of Mechanical Engineering at Worcester Polytechnic Institute demonstrate a completely new micro-array design that is looking at capture and detection of CTCs from an entirely new perspective. 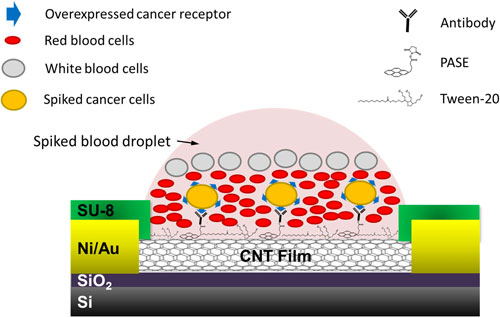 Rather than using magnetic and microfluidic methods are used in isolation of CTCs, the team used a static isolation in the form of micro-arrays of single-walled carbon nanotubes (SWCNTs). Using photo-lithography, metal deposition, and etching techniques, they fabricated chips containing a 76-element array of SWCNT devices that are functionalized with anti-EpCAM, anti-human epithelial growth factor receptor 2 (anti-Her2) and non-specific immunoglobin (IgG) antibodies.

“Our nanotube–CTC chip incorporates both detection and capture technology,” Panchapakesan points out. “It is also a self-enrichment and leukocyte depletion process the way blood settles on the device. This is due to the hydrophobic nature of nanotubes resulting in droplet localization and size and density based settling of cancer cells, red blood cells and leukocytes.”

Furthermore, since this is a static micro-array isolation, it becomes possible to capture more elusive 30 nanometer structures called exosomes, which are secreted by cancer cells and have the same surface marker profile. Microfluidics cannot capture exosomes as they will be washed away/destroyed due to shear forces.

The chip can also isolate cells based on their biomarker profiles. Multiple biomarkers such as EGFR and Her2 are indicative of metastatic disease and therefore, this technique could be used to make multiple biomarker based captures.

The next step for the researchers is to test their nanotube–CTC chips in patients with different stages of cancer and validate this technology further to enable capture of rare CTCs in a single blood test using different markers.