Caris Life Sciences®, a leading innovator in molecular science focused on fulfilling the promise of precision medicine, today announced the results of a study that demonstrates the ability of the company’s ADAPT Biotargeting System™ to detect and classify women with or without breast cancer based on a minimally-invasive liquid biopsy of circulating exosomes from blood plasma. The study was published in Nature’s Scientific Reports (Scientific Reports 7, Article number: 42741 (2017) doi:10.1038/srep42741) on February 20.

“The ability to accurately detect breast cancer with a minimally-invasive blood-based method that covers a systems-wide range of biomarkers would offer a significant advance in breast cancer diagnosis and patient management,” said Dr. Lee Schwartzberg, Chief, Division of Hematology/Oncology at the University of Tennessee Health Science Center. “Results of this study provide a potential future opportunity to address shortcomings in the current standard of diagnostic testing utilizing mammography and other imaging techniques, which frequently generate indeterminate results that can result in patients facing invasive tissue biopsies.”

The ADAPT Biotargeting System uses a highly complex library of single-stranded molecules called oligodeoxynucleotide (ssODNs) aptamers that bind to individual and multi-component targets, enabling them to profile biological samples at a systems-wide scale. In this study, a parent library of approximately 1011 ssODNs was “trained” or enriched for aptamers that preferentially associate with plasma exosomes from women with or without breast cancer. The trained library was then tested against an independent set of plasma exosomes from women with or without disease. Aptamer-mediated affinity purification and mass spectrometry identified low-abundance exosome-associated proteins and protein complexes associated with the two groups. A blinded evaluation of 500 samples from healthy women and breast cancer-positive patients distinguished the two groups independent of breast tissue density.

Generation of Profiling Library for ADAPT 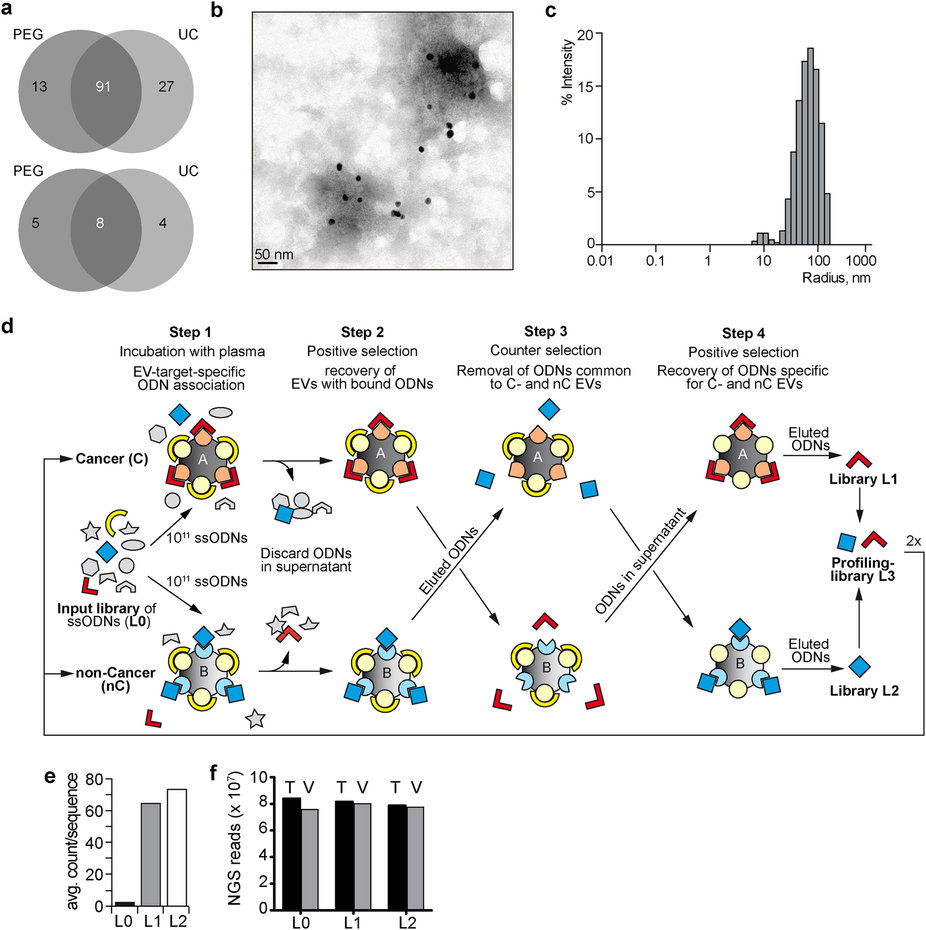 (a) Venn diagram showing the overlap between exosome-associated (top) and non-exosome-associated (bottom) proteins identified in PEG- or UC-precipitated plasma pellets. (b) TEM images of PEG precipitated exosomes (EV) visualized by anti-CD9 antibody coupled gold-nanoparticles (black spheres). (c) Dynamic light scattering (DLS) analysis of EV sizes distribution isolated by PEG precipitation.  (d) Library enrichment principle: a high-diversity molecule library (~1011 representatives) is contacted with blood plasma from biopsy-positive (Cancer, C) and, in parallel, with plasma from biopsy negative (non-Cancer, nC) individuals; in the 2nd step non-bound ssODNs are removed with supernatant and bound molecules are collected; in the 3rd step, ssODNs recovered from C are incubated with nC (and vice versa) and non-binders are removed with pellets; the 4th step is another binding to positive target as outlined in steps 1st and 2nd. This enrichment process was repeated three times with PCR in between: in the first iteration, UC was used to recover EVs; in the following two iterations, PEG-precipitation was used for EV recovery. A total of 119 biopsy-positive (n = 59), biopsy-negative (n = 30), and self-declared normal (n = 30) patient samples were used in the first round of L3 enrichment, while only the cancer and non-cancer samples were used in the subsequent rounds. This enrichment process delivers two separate lower-diversity libraries (~106 representatives) enriched to features (targets) present in samples A and B, respectively. (e,f) Quality and population assessment of the starting library (L0) and the respective libraries L1 and L2 obtained from (d). NGS sequence depth was similar for L0, L1 and L2 (f, grey bars: valid reads V, black bars: total reads T), whereas the number of copies per sequence was significantly increased in L1 and L2 (e), while the total number of unique sequences was reduced.

“Exosomes are increasingly recognized as a rich source of meaningful information underlying healthy and diseased states because they reflect the dynamic alterations of cellular processes during tumor progression,” said Michael Famulok, Ph.D., Professor at the Life & Medical Sciences (LIMES)-Institute, University of Bonn, Germany, and co-author of the paper. “This study is important because the results provide proof-of-concept supporting the characterization of complex phenotypes by using an unbiased aptamer-based and minimally-invasive profiling platform. While more work is required before a clinical offering is available, we are encouraged by these findings that indicate the potential of the ADAPT Biotargeting System to improve cancer diagnostics using this innovative approach.”

“This paper represents a new and novel method for diagnostics that is based on the unbiased profiling of molecular signatures obtained from liquid biopsies from breast cancer patients,” said David Spetzler, Ph.D., M.B.A., President and Chief Scientific Officer of Caris Life Sciences, and co-author of the paper. “This proof-of-concept study of our ADAPT Biotargeting platform in the diagnostics space provides evidence of the platform’s potential for other applications such as drug target discovery and development, biomarker identification and therapeutics.”