The team modified a simple microfluidic channel with an array of vertically aligned carbon nanotubes — rolled lattices of carbon atoms that resemble tiny tubes of chicken wire. The researchers had previously devised a method for standing carbon nanotubes on their ends, like trees in a forest. With this method, they created a three-dimensional array of permeable carbon nanotubes within a microfluidic device, through which fluid can flow.

Now, in a study published this week in the Journal of Microsystems and Nanoengineering, the researchers have given the nanotube array the ability to trap certain particles. To do this, the team coated the array, layer by layer, with polymers of alternating electric charge.

“You can think of each nanotube in the forest as being concentrically coated with different layers of polymer,” says Brian Wardle, professor of aeronautics and astronautics at MIT. “If you drew it in cross-section, it would be like rings on a tree.”

Depending on the number of layers deposited, the researchers can create thicker or thinner nanotubes and thereby tailor the porosity of the forest to capture larger or smaller particles of interest.

The nanotubes’ polymer coating may also be chemically manipulated to bind specific bioparticles flowing through the forest. To test this idea, the researchers applied an established technique to treat the surface of the nanotubes with antibodies that bind to prostate specific antigen (PSA), a common experimental target. The polymer-coated arrays captured 40 percent more antigens, compared with arrays lacking the polymer coating.

Wardle says the combination of carbon nanotubes and multilayer coatings may help finely tune microfluidic devices to capture extremely small and rare particles, such as certain viruses and proteins.

“There are smaller bioparticles that contain very rich amounts of information that we don’t currently have the ability to access in point-of-care [medical testing] devices like microfluidic chips,” says Wardle, who is a co-author on the paper. “Carbon nanotube arrays could actually be a platform that could target that size of bioparticle.”

The paper’s lead author is Allison Yost, a former graduate student who is currently an engineer at Accion Systems. Others on the paper include graduate student Setareh Shahsavari; postdoc Roberta Polak; School of Engineering Professor of Teaching Innovation Gareth McKinley; professor of materials science and engineering Michael Rubner, and Raymond A. And Helen E. St. Laurent Professor of Chemical Engineering Robert Cohen. 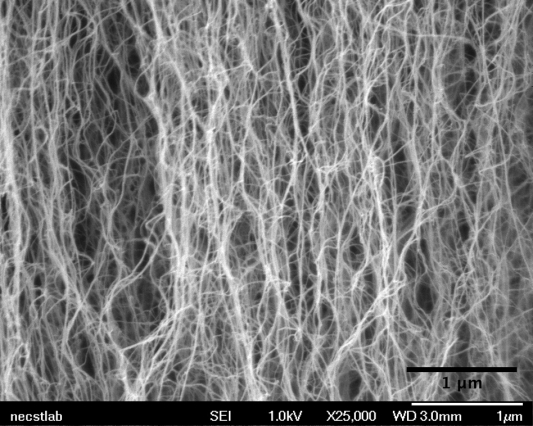 A zoomed in view of carbon nanotubes, showing individual tubes.

Carbon nanotubes have been a subject of intense scientific study, as they possess exceptional electrical, mechanical, and optical properties. While their use in microfluidics has not been well explored, Wardle says carbon nanotubes are an ideal platform because their properties may be manipulated to attract certain nanometer-sized molecules. Additionally, carbon nanotubes are 99 percent porous, meaning a nanotube is about 1 percent carbon and 99 percent air.

“Which is what you need,” Wardle says. “You need to flow quantities of fluid through this material to shed all the millions of particles you don’t want to find and grab the one you do want to find.”

What’s more, Wardle says, a three-dimensional forest of carbon nanotubes would provide much more surface area on which target molecules may interact, compared with the two-dimensional surfaces in conventional microfluidics.

“The capture efficiency would scale with surface area,” Wardle notes.

The team integrated a three-dimensional array of carbon nanotubes into a microfluidic device by using chemical vapor deposition and photolithography to grow and pattern carbon nanotubes onto silicon wafers. They then grouped the nanotubes into a cylinder-shaped forest, measuring about 50 micrometers tall and 1 millimeter wide, and centered the array within a 3 millimeter-wide, 7-millimeter long microfluidic channel.

The researchers coated the nanotubes in successive layers of alternately charged polymer solutions in order to create distinct, binding layers around each nanotube. To do so, they flowed each solution through the channel and found they were able to create a more uniform coating with a gap between the top of the nanotube forest and the roof of the channel. Such a gap allowed solutions to flow over, then down into the forest, coating each individual nanotube. In the absence of a gap, solutions simply flowed around the forest, coating only the outer nanotubes.

After coating the nanotube array in layers of polymer solution, the researchers demonstrated that the array could be primed to detect a given molecule, by treating it with antibodies that typically bind to prostate specific antigen (PSA). They pumped in a solution containing small amounts of PSA and found that the array captured the antigen effectively, throughout the forest, rather than just on the outer surface of a typical microfluidic element.

Wardle says that the nanotube array is extremely versatile, as the carbon nanotubes may be manipulated mechanically, electrically, and optically, while the polymer coatings may be chemically altered to capture a wide range of particles. He says an immediate target may be biomarkers called exosomes, which are less than 100 nanometers wide and can be important signals of a disease’s progression.

“Science is really picking up on how much information these particles contain, and they’re sort of everywhere, but really hard to find, even with large-scale equipment,” Wardle says. “This type of device actually has all the characteristics and functionality that would allow you to go after bioparticles like exosomes and things that really truly are nanometer scale.”