One way exercise can counter the damage of diabetes is by enabling activation of a natural system we have to grow new blood vessels when existing ones are ravaged by this disease, scientists report.

Angiogenesis is the ability to form new blood vessels, and diabetes not only damages existing blood vessels, it hinders this innate ability to grow new ones in the face of disease and injury, say experts at the Vascular Biology Center at the Medical College of Georgia.

Endothelial cells line our blood vessels and are essential to that new blood vessel growth.

Now the MCG scientists have the first evidence that in the face of diabetes, even one 45-minute session of moderate intensity exercise enables more exosomes, submicroscopic packages filled with biologically active cargo, to deliver directly to those cells more of the protein, ATP7A, which can set angiogenesis in motion, they report in The FASEB Journal.

Not unlike the most sophisticated and efficient delivery services we have all come to rely upon, particularly during the pandemic, what exosomes carry depends on where they come from and where they are headed, says Dr. Tohru Fukai, MCG vascular biologist and cardiologist.

While he and co-corresponding author MCG vascular biologist Dr. Masuko Ushio-Fukai are not yet certain of the origin of these helpful exosomes, it’s clear that one place they deliver is to endothelial cells, Fukai says.

In both an animal model of type 2 diabetes and a handful of healthy 50-something-year-olds, two weeks of volunteer running on a wheel for the mice and that one cardio session for the humans increased levels of ATP7A in the exosomes that attached to endothelial cells.

At that point, the activity did not significantly impact the weight of the mice, the scientists note, but it did also increase a marker of endothelial function and factors like, vascular endothelial growth factor, needed for angiogenesis.

Exercise also increased the amount of the powerful, natural antioxidant extracellular superoxide dismutase, or SOD3, but it’s the heavier payload of ATP7A, which is also known to deliver the essential mineral copper to cells, that is key to making good use of the SOD3 present, Ushio-Fukai says.

SOD3, is an important natural antioxidant produced by vascular smooth muscle cells in the walls of blood vessels as well as skeletal muscle cells, which helps us maintain healthy levels of reactive oxygen species, or ROS. ROS is a natural byproduct of our use of oxygen that is an important cell signal, enabling a variety of functions. But in diabetes, high blood sugar levels result in high ROS levels that instead hinder important normal functions.

The Fukais have shown that ATP7A levels are reduced in diabetes. They also now have some of the first evidence that exosomes circulating in the plasma of sedentary animal models of type 2 diabetes actually impair angiogenesis when placed in a dish with human endothelial cells, as well as in an animal model of wound healing.

The scientists suggest that synthetic exosomes, already under study as drug-delivery mechanisms, could one day work as an “exercise mimetic” to improve patients’ ability to grow new blood vessels when diabetes has damaged their innate ability.

In fact, they have already generated exosomes in which SOD3 is overexpressed and found improved angiogenesis and healing in a mouse model of diabetes.

The way it’s supposed to work is SOD3 is naturally silenced in endothelial cells, so they must get it from other cells, notes Ushio-Fukai, hence the importance of exosome delivery. SOD3 must then bind to endothelial cells at its natural spot called the heparin-binding domain, and the copper transporter ATP7A must be present to enable SOD3 to be active there, Fukai says. Both ATP7A and the binding site are key, Fukai notes. For example, when they removed the binding site from the endothelial cells, which can happen in nature, the benefits were lost. 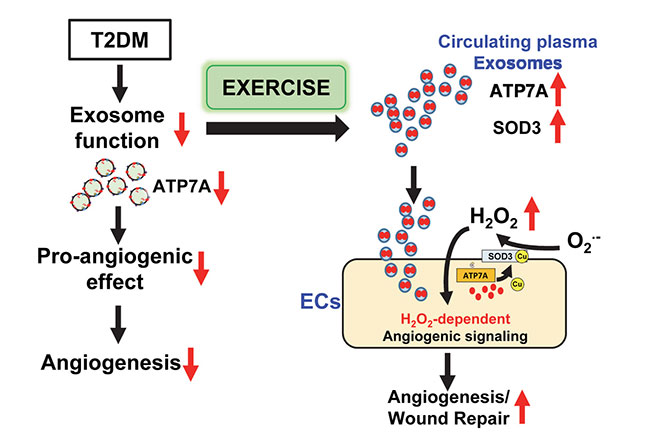 Once on the scene and active, SOD3 converts the ROS superoxide into hydrogen peroxide, or H2O2, another signaling ROS that helps support normal endothelial cell function. The Fukais have reported that in human endothelial cells, overexpressing SOD3 promotes angiogenesis by increasing H2O2.

A copper connection also runs throughout this process as endothelial cells regularly use a lot of copper, and ATP7A, known to transport the essential mineral that we consume in foods like nuts and whole grains, is dependent on copper itself.

Physical exercise, like running or walking on treadmill, prompts muscles to contract which in turn prompts release of exosomes into the blood.

When Fukai was a postdoc in the Emory University Section of Cardiology he was part of the research group that was the first to show that exercise increases SOD3 activity. SOD3 levels decrease with age and with some disease states like diabetes and hypertension.

Exosomes are being studied as biomarkers for a wide range of diseases like cancer and diabetes as well as precise treatment delivery tools. For example, exosomes produced by a cancer cell will hone right back to a cancer cell.

About 1 in 10 Americans have diabetes, according to the Centers for Disease Control and Prevention.