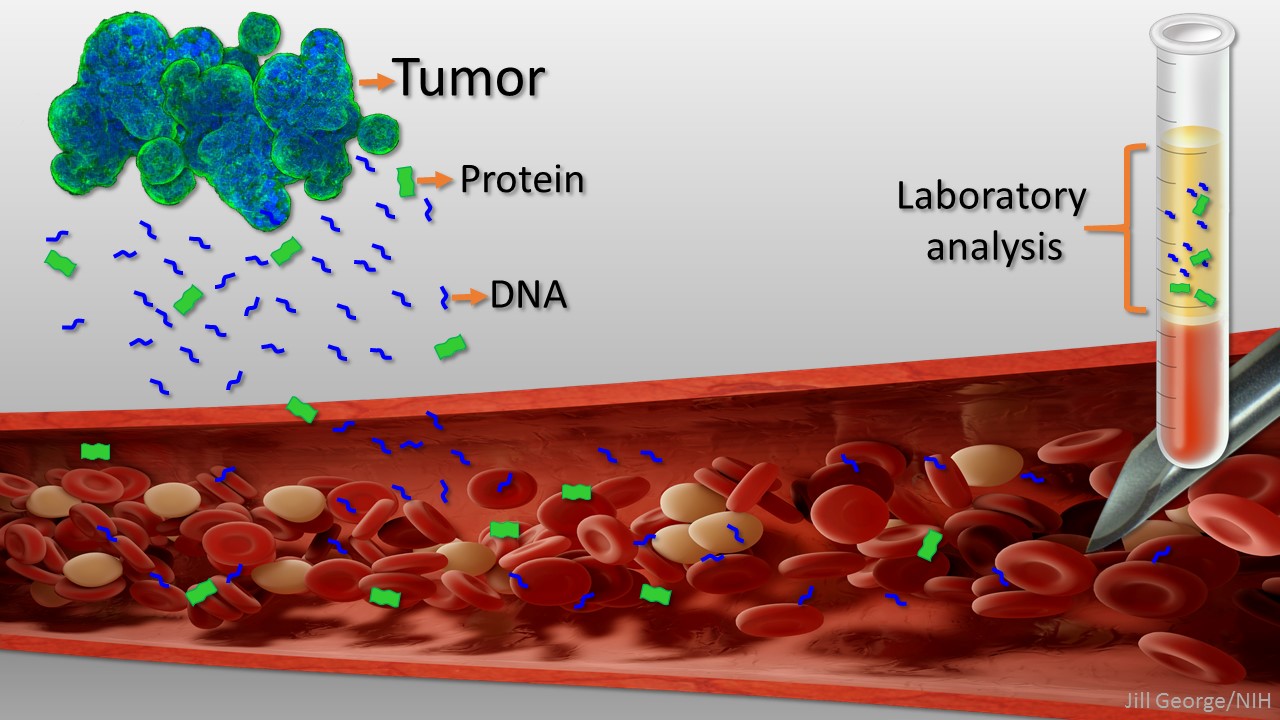 By Francis Collins at NIH – Early detection usually offers the best chance to beat cancer. Unfortunately, many tumors aren’t caught until they’ve grown relatively large and spread to other parts of the body. That’s why researchers have worked so tirelessly to develop new and more effective ways of screening for cancer as early as possible. One innovative approach, called “liquid biopsy,” screens for specific molecules that tumors release into the bloodstream.

Recently, an NIH-funded research team reported some encouraging results using a “universal” liquid biopsy called CancerSEEK [1]. By analyzing samples of a person’s blood for eight proteins and segments of 16 genes, CancerSEEK was able to detect most cases of eight different kinds of cancer, including some highly lethal forms—such as pancreatic, ovarian, and liver—that currently lack screening tests.

In a study of 1,005 people known to have one of eight early-stage tumor types, CancerSEEK detected the cancer in blood about 70 percent of the time, which is among the best performances to date for a blood test. Importantly, when CancerSEEK was performed on 812 healthy people without cancer, the test rarely delivered a false-positive result. The test can also be run relatively cheaply, at an estimated cost of less than $500.

Cancers arise when gene mutations occur in individual cells, dysregulating their normal growth and allowing them to divide without the usual restraints. As the clump of cancer cells expands, some die and bits of their mutated DNA can end up in the bloodstream. Liquid biopsies then search the blood for those bits of DNA carrying mutations associated with cancer. In 2016, the FDA approved the first liquid biopsy test for detecting a single mutation in patients with non-small cell lung cancer for use in guiding treatment decisions of people already known to have this type of cancer [2]. But developing a liquid biopsy test that could screen apparently healthy people for a variety of early cancers has proven a much greater challenge.

In the study reported in the journal Science, a team led by Nickolas Papadopoulos at Johns Hopkins University School of Medicine, Baltimore, developed a liquid biopsy to test for multiple genes that are often mutated in common cancers. The test included a panel of more than 2,000 positions in 16 different genes, which they predicted would catch a significant proportion of eight common cancers.

However, the researchers also suspected DNA evidence alone might not be enough to identify all cancers, or where in the body a cancer originated. Previous studies had shown that many very early tumors don’t release DNA into the bloodstream at detectable levels, and cancers in different parts of the body can have the same growth-promoting mutations.

So, the researchers scoured the scientific literature in search of proteins to add to their panel and build an even better test. The researchers settled on eight protein markers. Based on their preliminary lab studies, their choices appeared especially promising for differentiating a healthy person from someone with cancer.

The researchers then enrolled people diagnosed with one of eight cancer types: ovary, liver, stomach, pancreas, esophagus, colon, lung, and breast. No study participants had undergone chemotherapy or shown evidence that their cancer had spread beyond the original site. The team also tested 812 healthy people with no known history of cancer.

After performing all of the tests, the researchers found CancerSEEK was best at detecting stage II or III cancers, primary tumors that haven’t metastasized but are getting large. However, it still detected 43 percent of early stage I cancers. The test also detected some cancers better than others. In fact, the panel almost never missed a case of ovarian or liver cancer. But it wasn’t as good in picking up colorectal, lung, and breast cancers.

The test also did well in avoiding false positives. Only 7 of the 812 healthy people—or less than 1 percent—received a false-positive result. (It remains unclear whether those individuals might have a cancer that’s as-yet undetected.) That’s important because false positive test results can lead to anxiety and costly, unnecessary follow-up testing.

A major limitation of other liquid biopsy tests has been their inability to determine the location of a cancer. Employing an approach called machine learning, the researchers found that a computer could be trained to use a patient’s test results to determine where in the body the tumor most likely originated. Remarkably, without supplying any other clinical information, the computer narrowed down the tissue of origin to one of two organs in 83 percent of patients with a positive blood test result.

Of course, the study participants were already known to have a specific type of cancer. The critical next step is to find out how well CancerSEEK works in detecting cancer in the general population among people with no history of the disease. There are also questions about whether people with inflammatory or other health conditions (but not cancer) that cause detectable tissue damage might also test positive.

It will take time, but those answers are forthcoming. Papadopoulos reports that they’ve already begun enrolling 10,000 people that aren’t known to have cancer in a study designed to learn more about the test. If all goes well, the hope is it may one day be as easy for primary care doctors to order a blood test to screen for many common forms of cancer as it now is to order a test for blood glucose or cholesterol. And that would give many more people the best chance to beat cancer before it spreads.