A new mechanism that slows down and may even prevent the natural ageing of immune cells – one of the nine ‘hallmarks of ageing’* – has been identified by an international team led by UCL scientists.

Published in Nature Cell Biology, researchers say the discovery in-vitro (cells) and validated in mice was ‘unexpected’ and believe harnessing the mechanism could extend the life of the immune system, allowing people to live healthier and longer, and would also have clinical utility for diseases such as cancer and dementia.

Explaining the study, lead author, Dr Alessio Lanna, Honorary Professor at UCL Division of Medicine, said: “Immune cells are on constant high-alert, always ready to fight pathogens. To be effective they also must persist for decades in the body – but the strategies employed to execute this life-long protection are largely unknown.

“In this research, we sought to find out what mechanisms exist to confer longevity to immune system cells, known as T cells, at the initiation of the immune response against an antigen – a foreign substance recognised by the immune-surveillance mechanisms of defence of the body.”

Why the immune system ages

Each of the chromosomes, present in all cells, contains a protective cap called a telomere; a specific DNA sequence that is repeated thousands of times. The sequence has two purposes: firstly, it protects the coding regions of the chromosomes and prevents them from being damaged, and secondly, it acts as an ageing clock that controls the number of replications (also known as divisions) a cell can make.

In T cells (a type of white blood or immune cell), along with most cells, the telomeres become shorter and shorter (telomere attrition) with each subsequent cell division. Once telomeres reach a critically short length, the cell ceases to divide and enters senescence – the process of being disposed by the immune system, or persist in an altered, dysfunctional state.

With the immune system no longer functioning effectively, this leads to the onset of chronic infections, cancerous disease and death. Telomere attrition has been described as one of the ‘hallmarks of ageing’*.

In the study, in vitro, researchers initiated an immune response of T-lymphocytes against a microbe (foreign infection). Unexpectedly, they observed a telomere transfer reaction between two types of white blood cells, in ‘extracellular vesicles’ (small particles that facilitate intercellular communication).  An antigen presenting cell (APC), consisting either of B cells, dendritic cells or macrophages, functioned as a ‘telomere donor’, to the T lymphocyte – the telomere recipient cell. Upon transfer of the telomeres, the recipient T cell became long-lived and possessed memory and stem cell attributes, enabling the T cell to protect a host against a lethal infection in the long term.

The telomere transfer reaction extended certain telomeres about 30 times more than extension exerted by telomerase. Telomerase is the single DNA synthesising enzyme that is devoted to telomere maintenance in stem cells, cells of the immune systems and found in fetal tissue, reproductive cells and sperm. However, it does not provide this function in other cells, leading to telomere attrition.  Even in immune cells where the enzyme is naturally active, continuous immune reactions cause progressive telomerase inactivation leading to telomere shortening, when cells stop dividing, and replicative senescence occurs.

Professor Lanna added: “The telomere transfer reaction between immune cells adds to the Nobel-prize winning discovery of telomerase and shows that cells are capable of exchanging telomeres as a way to regulate chromosome length before telomerase action begins. It is possible that ageing may be slowed down or cured simply by transferring telomeres.” 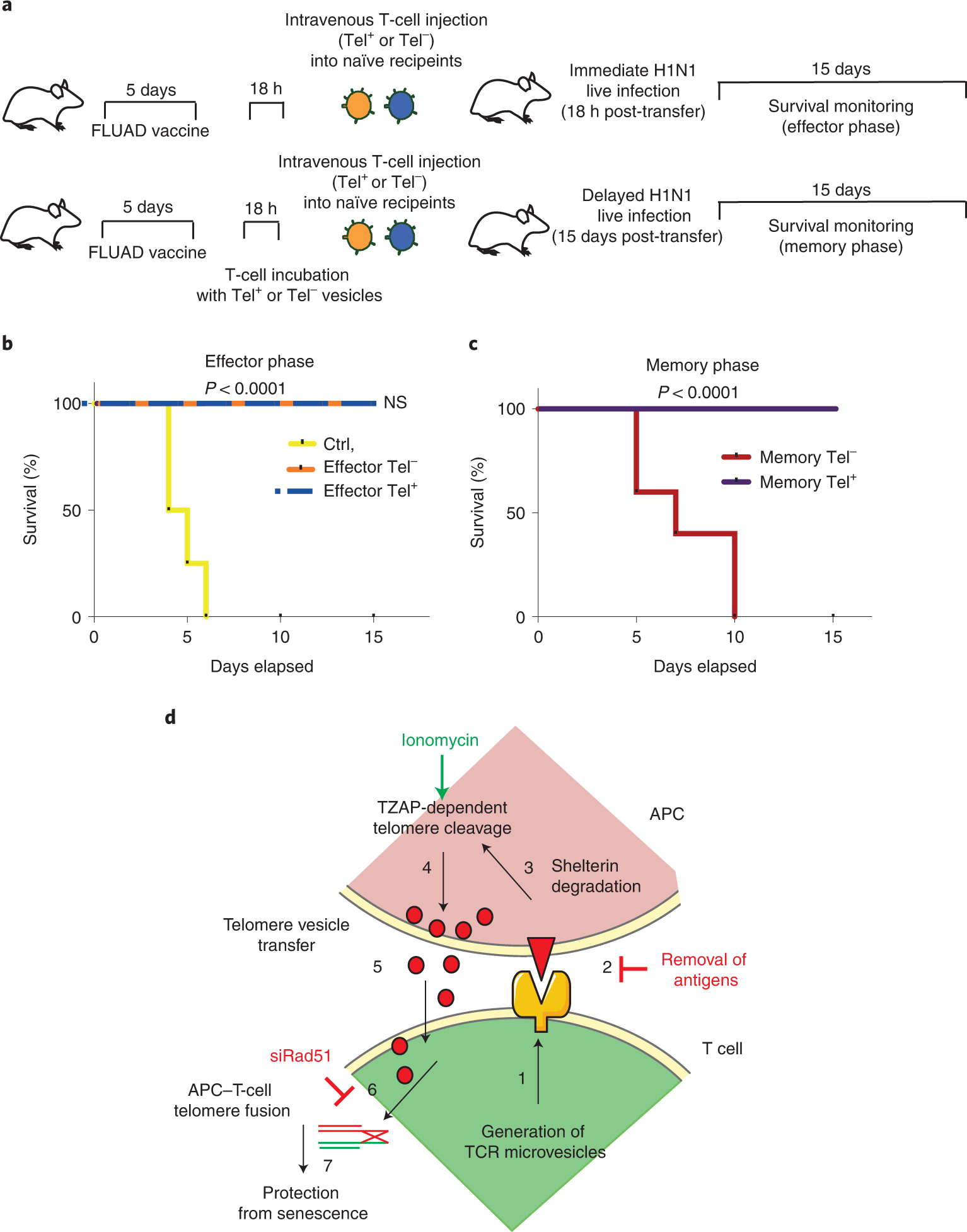 a, Experimental design. Mice were vaccinated with FLUAD (1:20 of the human dose) and killed after 5 days, to derive splenic CD4+ T cells that had been primed by the vaccine. Primed CD4+ T cells were incubated with 5,000 vesicles containing telomeres (Tel+ ves) or 5,000 depleted of telomeres (Tel− ves) obtained from ionomycin-activated APCs of congenic origin not exposed to FLUAD for 18 h, then adoptively injected into recipient naïve C57BL/6J mice (n = 5 animals per group). Control mice (n = 4 animals) were injected with T cells from C57BL/6J mice not primed with the FLUAD vaccine. Recipient mice were then early (after 18 h) and delayed (after 15 days) infected with H1N1 flu virus (3.5 × 105 PFU). Survival was monitored for 15 days, and clinical score was recorded throughout. Mice (n = 5 animals per group) were killed when a clinical score was equal or above 10, or in any case severe dyspnoea was observed. b, Survival of mice receiving either CD4+ T cells with APC telomere vesicles (Tel+) or with telomere-depleted vesicles (Tel−) from FLUAD-primed congenic donors as in a and infected immediately. Ctrl, animals injected with T cells that had not been exposed to the vaccine (yellow line). c, Survival of mice receiving either Tel+ or Tel− T cells as in b and infected 15 days later. d, Telomere transfer at the immune synapse, proposed model.

On discovering the new ‘anti-ageing’ mechanism, the same research team established that telomere extracellular vesicles can be purified from the blood, and, when added to T cells, present anti-ageing activities in immune systems from both humans and mice.

The researchers discovered (in human cells and mice) that the purified extracellular vesicle preparations may be administered alone or in combination with a vaccine and this extended durative immune protections that, in principle, may avoid need for revaccination.

Alternatively, the ‘telomere donor’ transfer reaction can be boosted directly in cells. While much more research is needed, the scientists say this illustrates the possibilities of new forms of prophylactic (preventative) therapies of immune senescence and age.

Professor Lanna concluded: “Telomere biology has been studied for more than 40 years. For decades, a single enzyme, telomerase, has been credited as the sole mechanism responsible for telomere elongation and maintenance in cells. Our results illuminate how a different mechanism that does not require telomerase to extend telomeres and act when telomerase is still inactive in the cell.”