Leading to the development of new lipid-based therapies

Japanese collaborative research teams have discovered new mechanisms of action by extracellular vesicles (EV) for the development and malignant progression of lymphomas.

Professor Ai Kotani and Kai Kudo, a graduate student, at the Tokai University has been investigating the roles of EV in the development of Epstein-Barr virus (EBV) -positive B-cell malignant lymphomas, but the mechanism of its action has not been fully clarified. Meanwhile, Professor Makoto Murakami and Yoshimi Miki researcher at the University of Tokyo has been clarifying a number of vital phenomena to which “secretory phospholipase A2 (sPLA2)” is involved. sPLA2 is a phospholipid-degrading enzyme existing in the extracellular environment; however, the source of the phospholipids that sPLA2 uses as a substrate outside cells has been unknown.

In this study, the research groups demonstrated that sPLA2 secreted from tumor-associated macrophage (TAM) in malignant lymphoma tissue degrades phospholipid of EV derived from tumor cells. They also found that this degradation dramatically improves EV function, such as “ease of cellular uptake” and “immunosuppressive effect,” and induction of various vital phenomena. Moreover, they discovered that lysophospholipids, degraded products of EV phospholipids, transmit signals to cells, namely, novel mechanisms of action that have not been known in EV biology. Using model mice that reproduce the development of lymphomas in humans, the research groups demonstrated that EV-degradation by sPLA2 is essential for tumorigenesis. Analysis of samples from patients with lymphoma also showed that sPLA2 is involved in tumorigenesis and malignant progression. 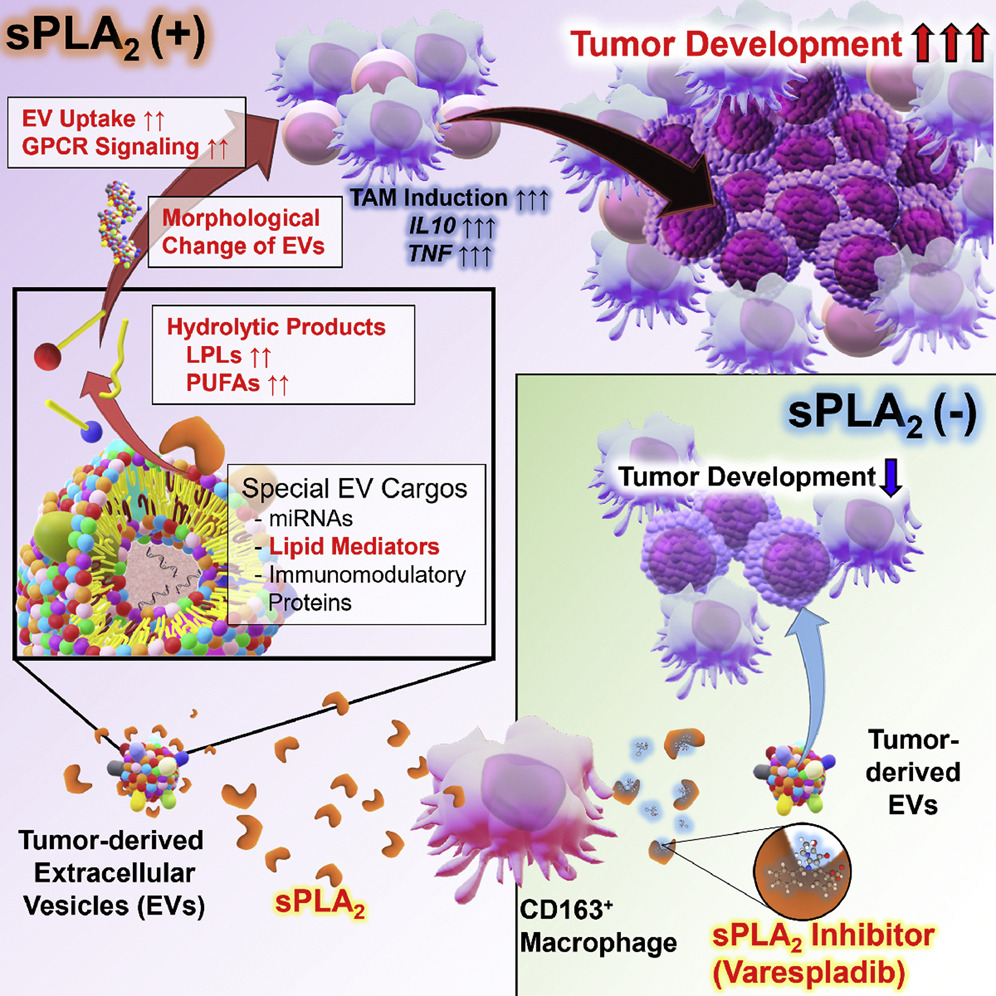 In tumorigenesis, sPLA2 is secreted by tumor-associated macrophages in tumor tissue. When the membrane phospholipids of EVs secreted from tumor cells are modified by sPLA2, various fatty acids and lysophospholipids are liberated, leading to changes in EV morphology and GPCR signaling enhancement, accelerated uptake, etc. are induced. As a result, the establishment of the tumor microenvironment is rapidly accelerated, leading to tumorigenesis. In contrast, inhibition of this sPLA2-EV axis by varespladib, an sPLA2 inhibitor, suppressed tumor formation. Thus, the sPLA2-EV axis may be a novel drug target for cancer therapy.

On the other hand, the study demonstrated that not only lymphoma-derived EVs but also EVs derived from other cancer cells are degraded by sPLA2 and revealed that the sPLA2-EV axis is a common phenomenon in tumorigenesis. Therefore, it is expected that this sPLA2-EV axis will become a new drug target for cancer treatment as a new “immune checkpoint.” In addition, based on sPLA2’s EV function enhancement demonstrated in this study, they are currently testing hypotheses that sPLA2 may enhance inherent abilities of various types of EV, such as “EV with tissue protecting and anti-inflammatory effects” previously reported by the Kotani’s group, and further development for therapeutic applications in the future is expected. (Patent pending).