A new University of California, Irvine-led study finds that the persistence of a marker of chronic cellular stress, previously associated with neurodegenerative diseases such as amyotrophic lateral sclerosis (ALS) and frontotemporal dementia (FTD), also takes place in the brains of Huntington’s disease (HD) patients.

Chronic cellular stress results in the abnormal accumulation of stress granules (SGs), which are clumps of protein and RNAs that gather in the cell. Prior to this study, published in the Journal of Clinical Investigation, it was not known if these types of granules were a pathological feature of HD, an inherited and progressive neurodegenerative disorder that typically strikes in the prime of life.

In addition to identifying SGs as a pathological feature of HD, researchers made several other discoveries including that extracellular vesicles, which float in cerebrospinal fluid (CSF) and act as a messaging system between cells in the brain, can potentially alter the behavior of other cells and impact the abnormal accumulation of the granules. They also found that TAR DNA-binding protein 43 (TDP43) is mislocalized, which has emerged as a critical feature of multiple neurodegenerative diseases.

“We were initially interested in whether the profile of these messages could serve as a biomarker for HD and investigated whether the vesicles from HD patients contain messages that are different from those of unaffected individuals,” said first author Isabella I. Sanchez, PhD, from the Thompson Laboratory at UCI School of Medicine.

Researchers found that the CSF of HD patients carried messages in the form of small non-coding RNAs (miRNAs) that did were predicted to alter the production of proteins that are indispensable for SG formation. They soon identified a key player in SG dynamics, GTPase-activating protein-binding protein 1 (G3BP1), as a predicted target. 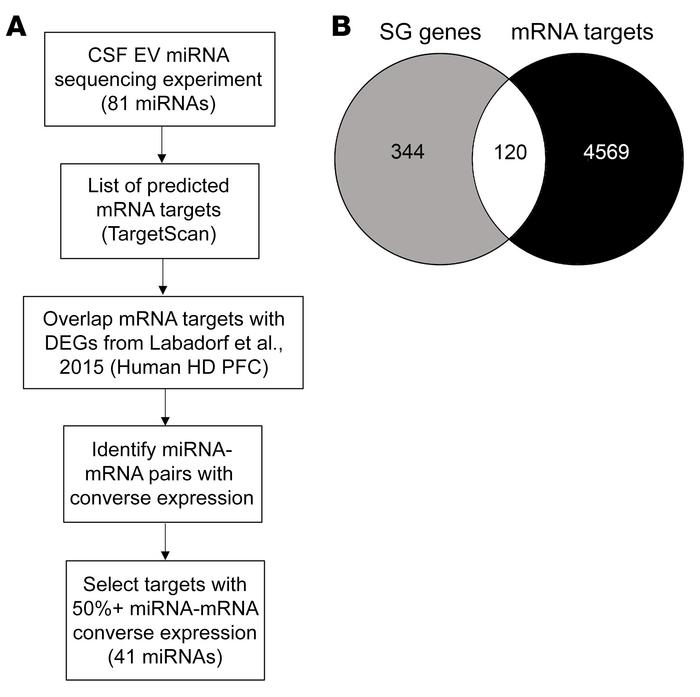 (A) Workflow used to identify CSF EV miRNAs with likelihood of functional relevance based on overlap with RNA sequencing data from the prefrontal cortex of patients with HD (34). (B) Overlap of 4689 CSF EV mRNA targets and 464 mammalian SG genes (74) is significantly higher than what is expected based on a genome larger than 21,000 genes (P < 0.002 using Fisher’s exact test).

“This finding regarding the miRNAs was very exciting, as we had simultaneously started investigations to characterize SGs in HD brain tissues.  SGs can be very difficult to detect in brain tissues, and it just so happened that we had narrowed down the adequate conditions and were ready to being characterizing G3BP1 SGs in HD mouse and HD patient brains,” said Leslie M. Thompson, PhD, Donald Bren and UCI Chancellor’s professor in the Departments of Psychiatry & Human Behavior and Biological Chemistry at the UCI School of Medicine, and Neurobiology and Behavior at the UCI School of Biological Sciences.

While SG formation is a normal physiological process that enables cells to overcome stressful conditions, the SG pathology in HD may result from an accumulation G3BP1 SGs that initially served a protective function, but develop into hyper-stable structures over time.

“We hope that our findings will inform future studies aimed at understanding how SG accumulation affects HD progression, and whether targeting SG pathology is a viable therapeutic avenue in the fight against HD,” said Robert Spitale, PhD, professor in the Department of Pharmaceutical Sciences and also a lead author of the study.