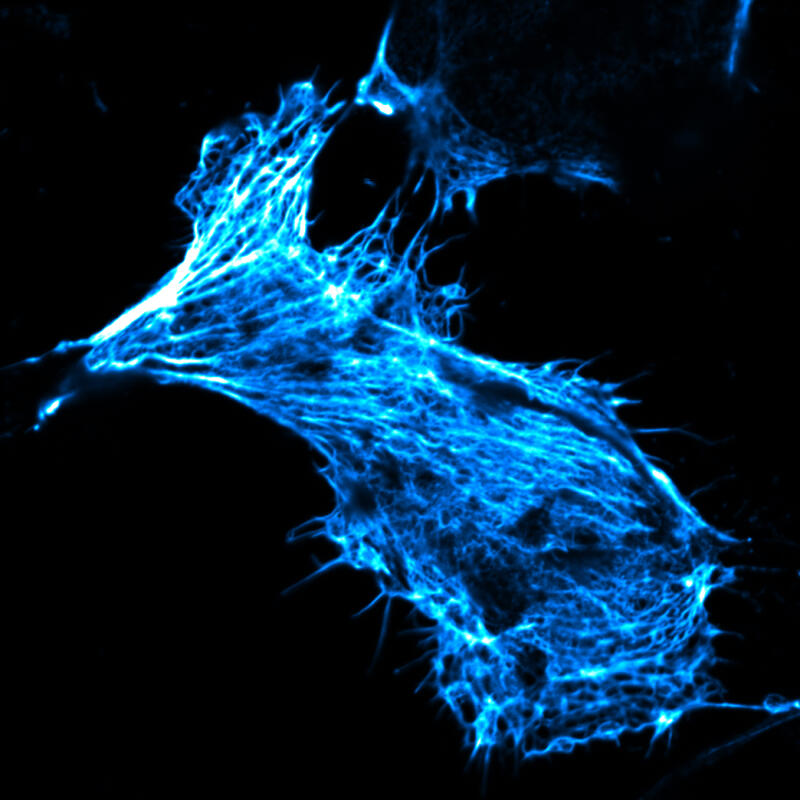 Microscope image of a living human cancer cell in culture. Its actin cytoskeleton has been stained with fluorescently labelled phalloidin. Scientists delivered this toxic substance into the cell using newly developed nanocontainers, and thus demonstrated that the containers can transport substances which usually cannot pass through cell membranes into cells.

Nanocontainers can transport substances into cells where they can then take effect. This is the method used in, for example, the mRNA vaccines currently being employed against Covid-19 as well as certain cancer drugs. In research, similar transporters can also be used to deliver labelled substances into cells in order to study basic cellular functions. To take advantage of their full potential, scientists are conducting intensive research into how nanocontainers interact with biological environments and how they have to be chemically constructed to deliver cargo into cells in the gentlest and most controllable way possible.

Scientists at the University of Münster have recently developed a new type of nanocontainer that is constructed entirely from biological components. Unlike other cargo transporters, these are not based on lipids but on sugar compounds which are sealed with a shell of protein structures – so-called polypeptides – the thickness of which is precisely tailored.

“We do produce the components of our nanocontainers synthetically, but they are taken up by cells and – due to the overall structure we have developed – also degraded by them just like naturally occurring substances,” explains chemist Prof Bart Jan Ravoo. “For the degradation of the container shell inside the cell, we make use of two naturally occurring mechanisms – as a result, the transported substances are released rapidly, as soon as they arrive in the cell,” adds biochemist Prof Volker Gerke.

The scientists want to use the tiny nanocontainers, which are about 150 nanometers in diameter, to load cells with labelled biologically relevant lipids that can be used to study transport processes occurring within the cell membrane. In addition, they plan to further develop the chemical design of the containers in such a way that they are, for example, only taken up by certain types of cells or only release their cargo when stimulated by external light. In the future, transport systems built from sugar and protein components might also be suitable for applications in living organisms to deliver drugs specifically into certain tissues and cells. The study was published in the journal “Advanced Science”.

Details on methods and results

The principle behind the newly developed nanocontainers: a basic sugar structure (cyclodextrin) encloses the cargo to be transported (yellow circles) and is sealed by an outer shell of polypeptides. Upon arrival in the cell, naturally occurring enzymes degrade this shell so that the cargo is released.

To synthesize the new cargo transporters, the scientists used sugar compounds (modified cyclodextrins) that are similar in structure – and thus behaviour – to certain lipids naturally found in every cell. Similar to the protective cell membrane lipids, the sugar structures arrange themselves, forming a shell in which they enclose the substances to be transported. However, because the resulting container is still leaky and would lose its cargo over time, the scientists added protein structures (polypeptides) that form a sealing layer around the container.

“To test how thick the sealing layer needed to be, we varied the length of the peptide sequences and tailored them so that the containers stably encapsulated their cargo,” explains Sharafudheen Pottanam Chali, a chemistry doctoral student and one of the study’s two lead authors.

Nanocontainers that use a natural pathway into cells

In the next step, the scientists investigated whether and how the newly developed nanocontainers were taken up by cells. Their hypothesis was that this happens via so-called endocytosis. In this process, the cells internalize a part of their cell membrane and pinch it off, creating small vesicles called endosomes in which extracellular material is transported into the cell. To test this, the scientists used a sugar compound (dextran) known to be taken up by endocytosis. They treated their cell cultures with red fluorescent dextran and, at the same time, added nanocontainers filled with a green fluorescent cargo (pyranine).

“In the fluorescence microscope, it became visible that both substances were taken up into the cells equally and their fluorescence overlapped visibly – therefore we could conclude that the nanocontainers, just like the dextran, were efficiently taken up by the cells through the endosomal transport process,” explains Sergej Kudruk, a biochemistry doctoral student and also a lead author of the study.

Container shell is degraded by enzymes in the cells’ endosomes

Conditions inside the endosomes differ from those of the cellular environment, something which the scientists already were considering when designing their nanocontainers. They constructed the containers in such a way that the altered environment in the endosomes destabilizes and partially degrades the polypeptide shell – the nanocontainers thus become leaky and release their cargo into the inside of the cell.

“When the containers are taken up into endosomes, two types of enzymes, which we knew to be present in endosomes and which can contribute to the degradation of the shell at specific sites, come into play,” explains Sergej Kudruk. “So-called reductases degrade the disulfide bridges that were previously established to crosslink the peptide molecules of our nanocontainers – in addition, peptidases cleave the peptide molecules themselves,” adds Sharafudheen Pottanam Chali.

The scientists also tested the degradability of the container shell outside the cell. To do so, they loaded the containers with a fluorescent dye and simulated part of the complex endosomal microenvironment by using the enzyme trypsin as well as reducing agents. After treatment, the dye leaked out immediately.