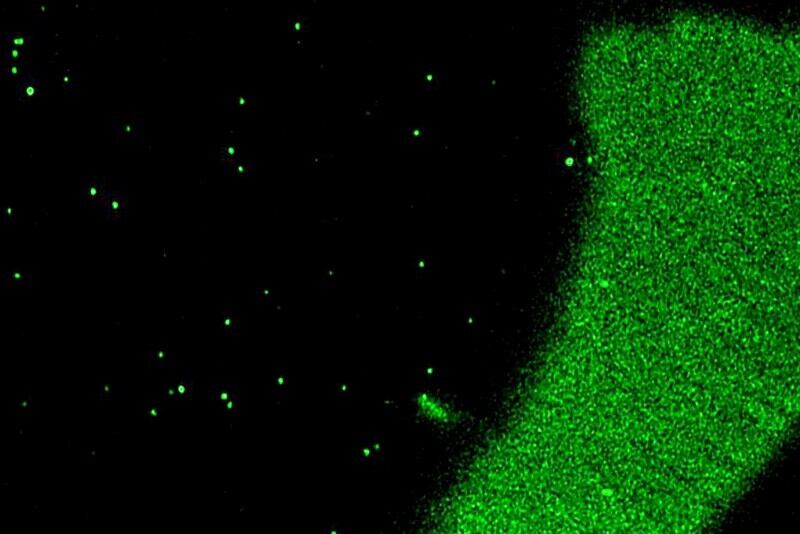 Using a Zeiss LSM 880 confocal microscope with Airyscan detector, researchers in UD Assistant Professor Jessica Tanis’ lab can image extracellular vesicles, which are made visible by a green fluorescent protein. “To someone who has never looked at EVs before, they look like stars in the sky,” Tanis says. On the right is a portion of the worm model she uses.

Scientists have known for decades that our cells constantly shed tiny pieces known as extracellular vesicles (EVs), but until relatively recently they believed that this process was merely a way for cells to rid themselves of material that was no longer needed.

“For a long time, EVs were thought of as a nonspecific garbage disposal mechanism,” said Jessica Tanis, assistant professor in the Department of Biological Sciences at the University of Delaware.

As it turns out, nothing could be further from the truth.

Scientists have learned that EVs, despite their extremely small size, have enormous signaling potential and play a critical role in communication between cells. They carry unique “cargos” of proteins, nucleic acids and other materials from the cell that released them. The transfer of these bioactive molecules by EVs is essential for the development, and contributes to the progression, of conditions such as cancer and neurodegenerative diseases.

“My lab is working on increasing our understanding of these tiny vesicles that can give you a glimpse into what’s going on in a particular cell,” said Tanis, whose team was recently awarded a $1.8 million National Institutes of Health (NIH) grant for this research.

“Remarkably, an individual cell can release multiple populations of EVs, each containing different cargos. We hope that our findings will provide new insights into how a cell packages and releases these distinct subsets of EVs. What are the cargos in each particular EV subtype? What determines which EV a cargo is loaded into? What are the functions of the different EVs?”

Those are among the questions her research group, which includes graduate and undergraduate students and a postdoctoral researcher, is seeking to answer. The NIH grant, “Elucidating biogenesis and cargo sorting mechanisms for discrete extracellular vesicle subpopulations,” will support the research project for five years.

Tanis works with a worm model, C. elegans, using fluorescently labeled proteins and powerful microscopes housed at UD’s Bioimaging Center to identify individual EVs. Doctoral student Michael Clupper said the research is possible only because of the highly sophisticated imaging equipment available at the center, which is part of the Delaware Biotechnology Institute.

Clupper came to UD for graduate school and began working on a project in Tanis’ lab involving a protein potentially linked to Alzheimer’s disease. When he discovered the protein packaged into EVs, his research shifted its focus to this new area — and a new skill he’s developed in working with the Bioimaging Center’s instruments.

“Few research institutions have the means to image EVs,” Clupper said. “We’re very fortunate at UD. The generalized term for these scopes is ‘super-resolution microscopes’ because they let you image down to a single molecule level.” 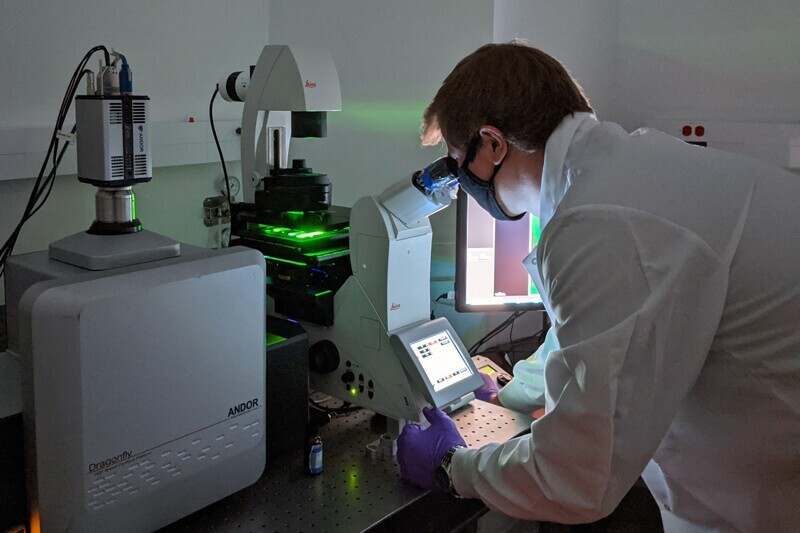 He and Tanis praised the assistance they’ve received from Jeffrey Caplan, the imaging center director, and his staff as they learned and fine-tuned their work with the instruments.

“We’ve had so much support and help,” Tanis said. “And this project wouldn’t be possible without Mike’s persistence in optimizing the complex imaging and analysis techniques.”

The biggest technical obstacle lies in the size of the EVs being studied.

“Imaging EVs is so challenging because of how small they are and how difficult it can be to reliably label them [with fluorescence] in a way that makes them visible to microscopes,” said Clupper, who now helps train other members of the research team in the imaging techniques he uses. “One of the challenges with pioneering work like this is that there isn’t really a manual or protocol; you have to figure it out yourself.”

Ultimately, he said, he hopes the work will pave the way for other EV researchers to use some of the tools and methods that the lab has developed as they explore new avenues of investigation.

And a great deal of research is being conducted on EVs, Tanis said. Scientists see potential for using them as biomarkers to diagnose disease and for engineering them to carry genetic cargo and drugs to targets within the body as an innovative therapeutic approach.