Northwestern researchers explore the role of exosomes in cancer metastasis

Northwestern Medicine scientists have demonstrated that tiny vesicles released from non-metastatic melanoma cells trigger an immune response that prevents the cancer from spreading throughout the body.

Michael Plebanek, a doctoral student in Feinberg’s Driskill Graduate Program in Life Sciences (DGP), was the first author of the study, published in Nature Communications.

The vesicles, called exosomes, are nano-sized delivery vehicles that are released by cells into the bloodstream. In recent years, significant research has focused on the role of exosomes released by cancer cells in promoting the spread of cancer.

This study, however, is the first to demonstrate that exosomes can also suppress metastasis, depending on the state of the cancer cell.

“Mike’s paper is important because it provides data on the mechanisms by which these natural nanovesicles enhance the ability of the immune system to clear tumor cells and prevent cancer from spreading,” said C. Shad Thaxton, ’04 MD, ’07 PhD, associate professor of Urology. Thaxton is also Plebanek’s advisor and a member of the Robert H. Lurie Comprehensive Cancer Center of Northwestern University. “Because the spread of cancer cells throughout the body is devastating for cancer patients, developing a deeper understanding of the process is critically important and adds to the knowledge that may result in new treatments.”

Previously, it had been established that exosomes released from highly metastatic tumor cells support the spread of cancer by traveling to other organs in the body, where they nurture an environment for incoming cancer cells.

In the current study, the Northwestern scientists wanted to understand the role of exosomes from tumors that had not progressed to metastasis.

Using animal models of melanoma, they discovered that the non-metastatic exosomes actually suppressed metastasis to the lung, by stimulating an immune response that helps to eliminate tumor cells. Specifically, the scientists showed that pre-metastatic exosomes carry a protein called PEDF which ramps up the production of patrolling monocytes — immune cells that crawl along blood vessels, clearing metastasizing melanoma cells along the way.

Exosomes in samples taken from patients with non-metastatic melanomas also supported the results. 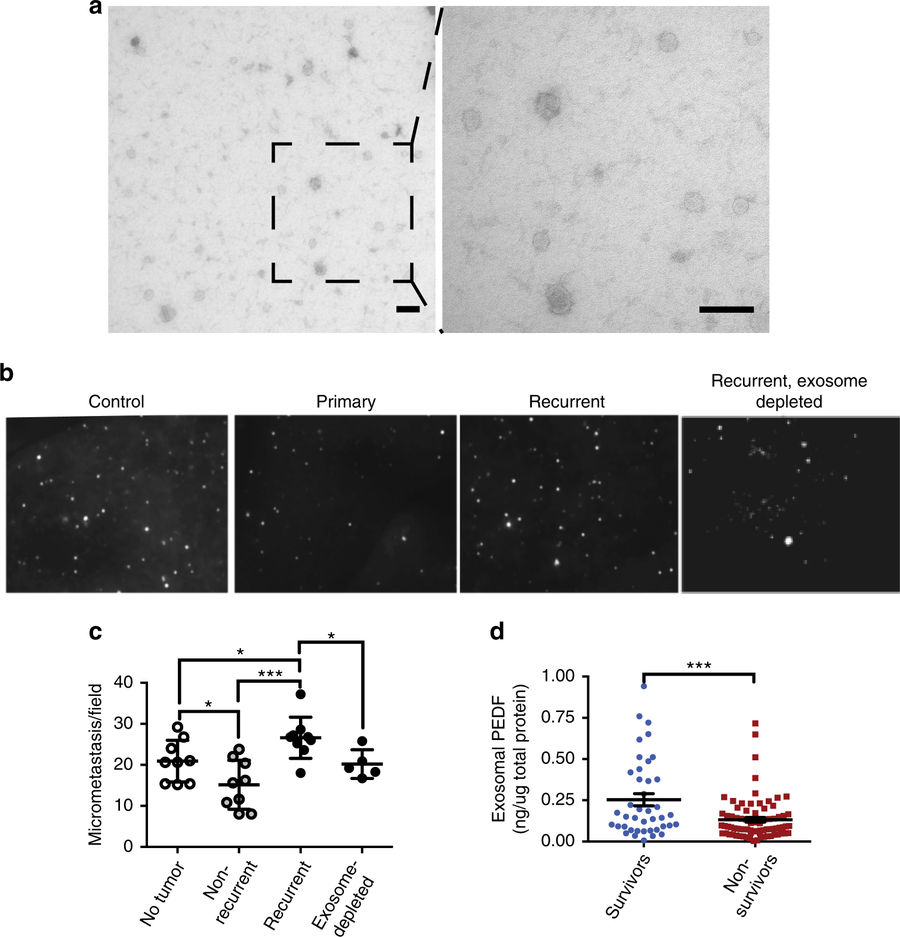 a Representative TEM of exosomes isolated from the sera of melanoma patients. Scale bar: 100 nm. b Exosomes from the sera of healthy control donors and of patients with primary and recurrent melanoma were injected into athymic nude mice. Exosome-depleted serum from recurrent patients was used as control. Nude mice were injected i.v. three time, with 10 μg exosomes, 48 h apart followed by injection of CFSE-labeled A375 melanoma cells. The extravasated melanoma cells were counted in the lungs 24 h later. c Analysis of the data presented in b. *P < 0.05, **P < 0.01, and ***P < 0.001 calculated by Tukey’s multiple comparison test with Bonferroni post-test (n = 9 for tumor-free, non-recurrent and recurrent groups, n = 5 for the group treated with exosome-depleted serum, five random images per animal were analyzed). Mean and s.d. values are shown. d Patients were separated into cohorts according to survival (death from melanoma over >5-year follow-up). Exosomal PEDF was measured by ELISA and normalized to the total protein content and correlated to survival. Statistical significance was determined by two-tailed t-test. P  < 0.0003. n = 41 (survivors) and n = 79 (non-survivors). Median and s.e.m. values are shown

The authors noted that the study’s findings have the potential to inform future development of novel cancer therapies and delivery methods.

“We could now identify other biomolecules in these exosomes that increase immune surveillance and prevent metastasis — such as PEDF — and possibly develop them into cancer therapies in the future,” Plebanek explained. “There’s also a nanotechnology avenue. One of the biggest opportunities with exosomes is that they are nano-sized delivery vehicles, and we could utilize the knowledge we’ve gained about the targeting properties of these exosomes.”

In a separate study, Plebanek was also co-first author of a paper published last month in Molecular Cancer Therapeutics, together with Debayan Bhaumik, who is currently a medical student at Feinberg. The team showed that synthetic nanoparticles with surface features that mimic high-density lipoproteins (HDL) are able to specifically target and inhibit certain cells of the immune system, thereby activating an immune response against cancer. In mouse models, the nanoparticles significantly inhibited the spread and growth of cancer, and increased survival.

The findings may enable the development of new therapies and approaches for cancer that work by activating the patient’s own immune system, Thaxton said.

“Mike is a superb graduate student, who has made a number of important discoveries and published in high-impact journals by exploring how natural and synthetic nanoparticles interact with biological systems,” Thaxton said. “To some, embarking upon this endeavor seems intimidating, as it requires the development of a complex and broad intellectual framework along with a diverse technical skill set.  Mike has always been up to the challenge.”