A team of University of Illinois at Urbana-Champaign researchers led by Bioengineering Professor Stephen Boppart has successfully visualized the tumor microenvironment of human breast tissue shortly after it was surgically removed from a patient in the operating room. The researchers achieved this using a new portable optical imaging system developed in Boppart’s lab.

This work, which was reported in a paper published online December 19 in Science Advances, marks a major step toward providing cancer researchers with a new tool for tracking tumor progression and physicians new technology for tissue pathology and diagnostics.

Typically, the process for diagnosing cancer takes several days. A surgeon first removes a tissue sample that is then processed with chemical dyes; later, the sample is sent to a pathologist for examination and subsequent diagnosis.

Label-free intraoperative nonlinear imaging of the tumor microenvironment provides real-time visualization of structural and molecular features, including extracellular vesicles that can be potential biomarkers of cancer aggressiveness. Credit: Biophotonics Imaging Laboratory, Beckman Institute for Advanced Science and Technology, University of Illinois at Urbana-Champaign.

“We believe that capturing the dynamic cellular and molecular features in freshly removed or biopsied tissue specimens contains valuable diagnostic and prognostic information that is currently lost when specimens are placed in a fixative and essentially killed quickly in order to preserve structure,” said Boppart, who is also a faculty member at the Beckman Institute for Advanced Science and Technology at Illinois and a professor of electrical & computer engineering (ECE) and the Carle Illinois College of Medicine.  “Our imaging platform and methodology allow us to extract this new information in real-time, at the point-of-procedure.”

The team demonstrated the viability of their imaging system in the operating room at Carle Foundation Hospital during breast cancer surgeries. Within 30 minutes of the diseased tissue being extracted, the researchers were able to identify specific tissue features, including molecular signatures associated with metabolic activity inside individual cells that make up the tumor microenivronment. 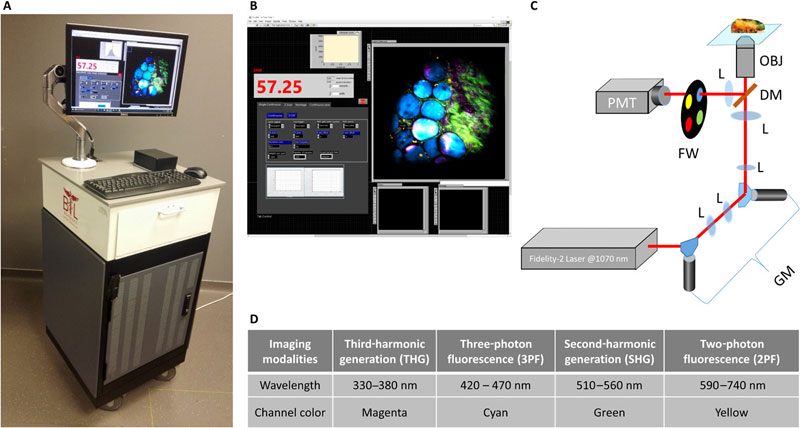 The researchers were also interested in measuring tumor-related extracellular vesicles (EVs), which are known to promote the spread of cancer.

As part of their studies, they also collected and imaged healthy breast tissue that surgeons had removed from cancer-free patients during breast reduction procedures.

In a comparison of the two types of tissue, they found a clear difference in EV density between the cancerous and healthy tissue. For example, the cancerous tissue exhibited increased EV densities and had shorter tumor-to-margin distance.

“What we observed about the extracellular vesicles is significant but it could only be accurately determined with our new system,” said Sun, noting how other portable optical imaging systems deployed in the operating room all alter the tissue samples either with fluorescent dyes or toxic ultraviolet light. “Our imaging technique works well with current cancer treatment routines and is free of any form of perturbation.”

According to Boppart, the team’s future plans include using the imaging system on tissue specimens obtained from needle-biopsy procedures that are routinely performed in outpatient settings. They will also continue using the system on samples from the operating room.

The imaging system is described in the paper, “Intraoperative visualization of the tumor microenvironment and quantification of extracellular vesicles by label-free non-linear imaging,” which was published online December 19, 2018.

Many dedicated research and support staff contributed to this research, in addition to those listed as authors on the paper, said Boppart. “Research like this is only possible because of the strong collaborative ties at the Beckman Institute, Carle, and across the Illinois campus.”

Source – University of Illinois at Urbana-Champaign