There is a growing demand for diagnostic markers for early disease detection and prognosis. Exosomes are potential biomarkers for cancer progression and neurodegenerative disease but it can be difficult to identify what tissue a specific exosome comes from. Researchers at Uppsala University and spin-off company Vesicode AB have solved this problem by developing a method that maps surface protein complements on large numbers of individual exosomes.

Exosomes are released from all cells in the body. They convey protein and nucleic acid cargos between the cells as a form of intercellular communication, and they represent potential circulating biomarkers for tumor progression and metastasis, as well as for early detection of neurodegenerative disease. 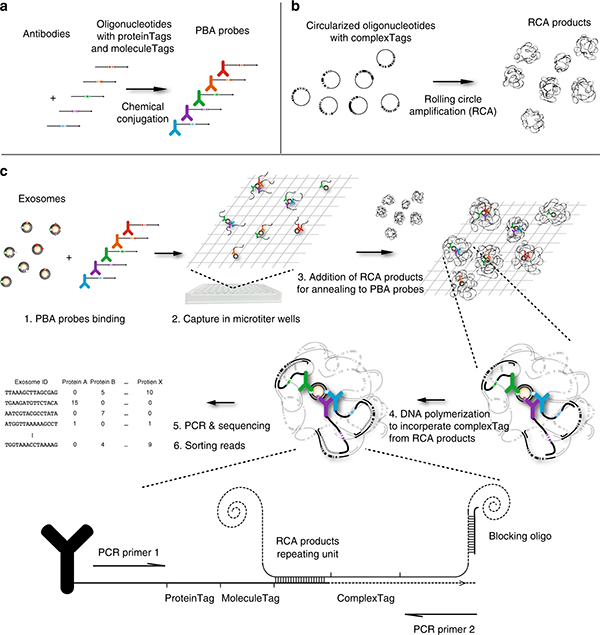 a Preparation of PBA probes by chemical conjugation of antibodies and DNA oligonucleotides containing an 8-nt proteinTag and an 8-nt random sequence moleculeTag. b Preparation of RCA products from circularized oligonucleotides comprising a 15-nt random sequence as complexTags, capable of encoding in excess of one billion unique complexTags. c To profile surface proteins of exosomes by PBA, exosomes are first incubated with PBA probes, followed by capture of exosomes with bound PBA probes in microtiter wells via immobilized cholera toxin subunit B (CTB). Oligonucleotides on PBA probes brought together by binding the same exosome are next allowed to hybridize to a unique RCA product, followed by enzymatic extension, incorporating the complexTag present in the RCA product along with a standard sequence motif, later used for amplification. To prevent the DNA polymerase from extending across nearby monomers in the RCA products, blocking oligonucleotides are pre-hybridized to the RCA products. Successfully extended DNA molecules on PBA probes are amplified by PCR using the PCR primer1 and PCR primer2 for library preparation, while oligonucleotides on the antibodies or RCA products fail to be amplified by the PCR primer pairs used for amplification. The PCR product were subjected to DNA sequencing to record the numbers of molecules with specific tag combinations, thus revealing the identities of proteins on individual exosomes

“This technology will not only benefit researchers studying exosomes, but also enable high-throughput biomarker discovery. We will further develop and validate the PBA technology and provide service to researchers starting later this year. We believe single exosome analysis will allow this exciting class of biomarkers to reach its full potential,” says Di Wu, researcher and inventor of the PBA technology and founder of Vesicode AB, commercializing the technique.

“This new technology will allow large-scale screens for biomarkers in disease, complementing a panel of methods for sensitive and specific detection of exosomes that we have previously established,” says Masood Kamali-Moghaddam one of the group leaders at the Molecular Tools unit at Uppsala University.