from The University of Alabama at Birmingham by Jeff Hansen – 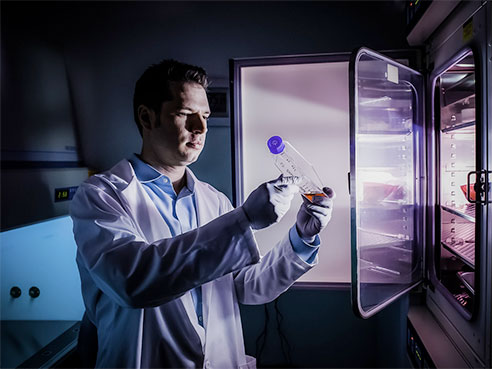 For more than five years, urine and cerebral-spinal fluid samples from patients with Parkinson’s disease have been locked in freezers in the NINDS National Repository, stored with the expectation they might someday help unravel the still-hidden course of this slow-acting neurodegenerative disease.

Now, research by Andrew West, Ph.D., and colleagues at the University of Alabama at Birmingham has revealed that the tubes hold a brand-new type of biomarker — a phosphorylated protein that correlates with the presence and severity of Parkinson’s disease. West and colleagues, with support from the National Institutes of Health, the Michael J. Fox Foundation for Parkinson’s Disease Research and the Parkinson’s Disease Foundation, are digging deeper into these biobanked samples, to validate the biomarker as a possible guide for future clinical treatments and a monitor of the efficacy of potential new Parkinson’s drugs in real time during treatment.

“Nobody thought we’d be able to measure the activity of this huge protein called LRRK2 (pronounced lark two) in biofluids since it is usually found inside neurons in the brain,” said West, co-director of the Center for Neurodegeneration and Experimental Therapeutics, and the John A. and Ruth R. Jurenko Professor of Neurology at UAB. “New biochemical markers like the one we’ve discovered together with new neuroimaging approaches are going to be the key to successfully stopping Parkinson’s disease in its tracks. I think the days of blindly testing new therapies for complex diseases like Parkinson’s without having active feedback both for ‘on-target’ drug effects and for effectiveness in patients are thankfully coming to an end.”

A biomarker helps physicians predict, diagnose or monitor disease, because the biomarker corresponds to the presence or risk of disease, and its levels may change as the disease progresses. Validated biomarkers can aid both preclinical trial work in the laboratory and future clinical trials of drugs to treat Parkinson’s. West and others are paving the way for an inhibitor drug that prevented neuroinflammation and neurodegeneration in an animal model of the disease, as reported last year by West and colleagues.

The new biomarker findings were published in Neurology in March and Movement Disorders in June. The biomarker, LRRK2, has been shown to play a role in hereditary Parkinson’s, and the most common of these mutations — called G2019S — causes the LRRK2 kinase to add too many phosphates to itself and other proteins. Why this leads to Parkinson’s disease is not yet clear.

The key to West’s biomarker approach was the recognition that LRRK2 can be purified from a new type of vesicle called exosomes found in all human biofluids, like urine and saliva. Cells in the body continually release exosomes that contain a mixture of proteins, RNA and DNA derived from different kinds of cells. West and colleagues were able to purify exosomes from 3- or 4-ounce urine samples donated by patients, and then measure phosphorylated LRRK2 in those exosomes.

In the Neurology study, they found that elevated phosphorylated LRRK2 predicted the risk for onset of Parkinson’s disease for people carrying a mutation in LRRK2, which is about 2-3 percent of all Parkinson’s disease patients. These findings were first tested with a preliminary, 14-person cohort of urine samples from the Columbia University Movement Disorders Center. That was followed by a larger replication study of 72 biobanked urine samples from the Michael J. Fox Foundation LRRK2 Cohort Consortium. All samples were provided to UAB in a blinded fashion to ensure the approach was rigorous.

Questions remain for this evidence of biochemical changes in LRRK2 in idiopathic Parkinson’s disease. One is finding out where the urinary exosomes come from. Given a suspected role for inflammation in Parkinson’s disease, it is interesting that LRRK2 is highly expressed in cells of the innate immune system. A possible explanation for the phosphorylated LRRK2 in patients with more severe disease may be an increased inflammation in those patients who have aggressive progression of disease.

In May, West was awarded a new U01 collaborative grant from the National Institute of Neurological Disorders and Stroke to further explore urinary exosomes and extend the observations to cerebral-spinal fluid as a marker for disease prediction and prognosis.

Source – University of Alabama at Birmingham