Breast cancer (BrCa) is the most frequent cancer type in women and a leading cause of cancer related deaths in the world. Despite the decrease in mortality due to better diagnostics and palliative care, there is a lack of prognostic markers of metastasis. Recently, the exploitation of liquid biopsies and in particular of the extracellular vesicles has shown promise in the identification of such prognostic markers.

In this study researchers at the Karolinska Institutet compared the proteomic content of exosomes derived from metastatic and non-metastatic human (MCF7 and MDA-MB-231) and mouse (67NR and 4T1) cell lines. They found significant differences not only in the amount of secreted exosomes but most importantly in the protein content of exosomes secreted from metastatic versus non-metastatic ones. They identified periostin as a protein that is enriched in exosomes secreted by metastatic cells and validated its presence in a pilot cohort of breast cancer patient samples with localized disease or lymph node (LN) metastasis.

Proteomic analysis of exosomes isolated from 67NR and 4T1 exosomes 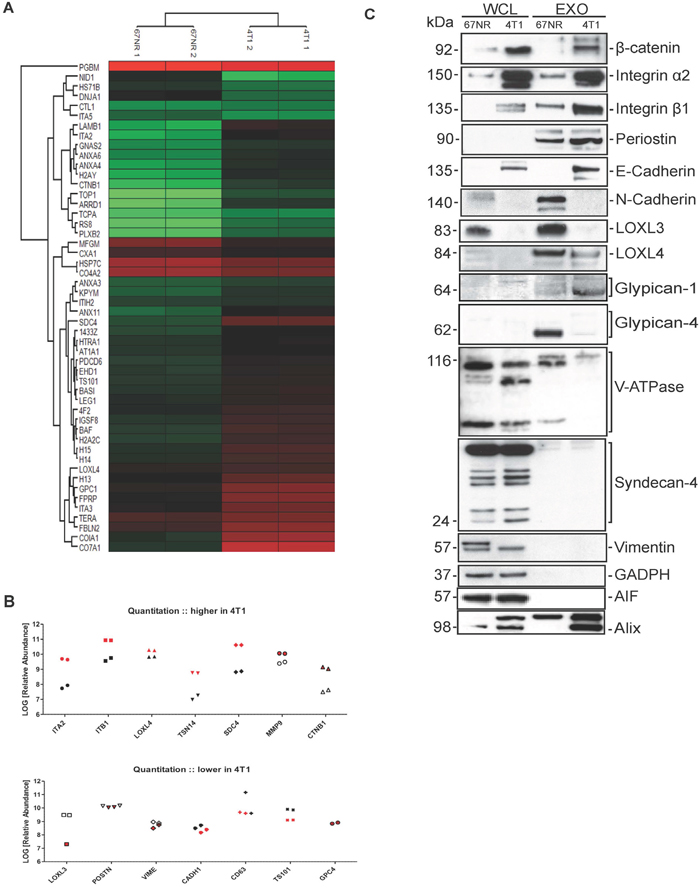 A. Heat map of hierarchical clustering of 50 proteins that were identified with the highest number of peptides, in 67NR and 4T1 exosomes. Red color is corresponding to relatively high abundance of proteins, green relatively low and black color represents equal expression of proteins. B. Quantification of proteins that were enriched in 4T1 exosomes (upper graph) and enriched in 67NR but found in low levels in 4T1 exosomes (lower graph). C. Validation of proteomics for 67NR and 4T1 exosomes: western blot analysis for 67NR and 4T1 cells and exosomes probed for the indicated proteins. GADPH used as loading control for the cells and AIF as a quality control for the exosome isolation. Equal amount of proteins (10-15μg) was loaded in each Western (n=2).