There is a need to develop strategies for early prediction of patients who will develop preeclampsia (PE), in order to establish preventive strategies to reduce the prevalence and severity of the disease and their associated complications. The objective of this study was to investigate whether exosomes and their microRNA cargo present in maternal circulation can be used as early biomarker for PE.

In presymptomatic women, who subsequently developed PE, the concentrations of EXO and PdE in maternal plasma were significantly greater than that those observed in controls, throughout pregnancy. The area under the ROC curves for EXO and PdE concentration were 0.745 ± 0.094 and 0.829 ± 0.077, respectively. In total, over 300 microRNAs were identified in exosomes across gestation, where hsa-miR-486-1-5p and hsa-miR-486-2-5p were identified as the candidate microRNAs. 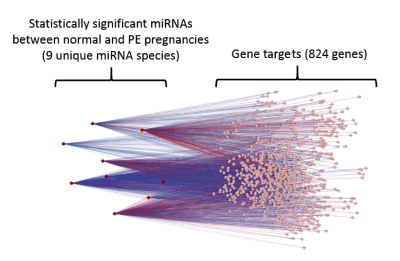 Gene target identification using CyTargetLinker was performed in the 9 microRNAs that were statistically significant between normal and PE pregnancies. A total of 824 genes were identified to be regulated by at least two of our candidate microRNAs, and are detected within at least two microRNA-gene target databases.

While the role of exosomes during PE remains to be fully elucidated, we suggest that the concentration and content of exosomes may be of diagnostic utility for women at risk of developing PE.