Extracellular vesicles are selectively enriched in RNA that has potential as disease biomarkers. To systemically characterize circulating extracellular RNA (exRNA) profiles, researchers from the Medical College of Wisconsin performed RNA sequencing analysis on plasma extracellular vesicles derived from 50 healthy individuals and 142 cancer patients. Of ~12.6 million raw reads for each individual, the number of mappable reads aligned to RNA references was ~5.4 million including miRNAs (~40.4%), piwiRNAs (~40.0%), pseudo-genes (~3.7%), lncRNAs (~2.4%), tRNAs (~2.1%), and mRNAs (~2.1%). By expression stability testing, they identified a set of miRNAs showing relatively consistent expression, which may serve as reference control for exRNA quantification. By performing multivariate analysis of covariance, they identified significant associations of these exRNAs with age, sex and different types of cancers. In particular, down-regulation of miR-125a-5p and miR-1343-3p showed an association with all cancer types tested (false discovery rate <0.05). The researchers developed multivariate statistical models to predict cancer status with an area under the curve from 0.68 to 0.92 depending cancer type and staging. This is the largest RNA-seq study to date for profiling exRNA species, which has not only provided a baseline reference profile for circulating exRNA, but also revealed a set of RNA candidates for reference controls and disease biomarkers.

Statistical summary of RNA species detected by RNA-seq across 192 libraries. 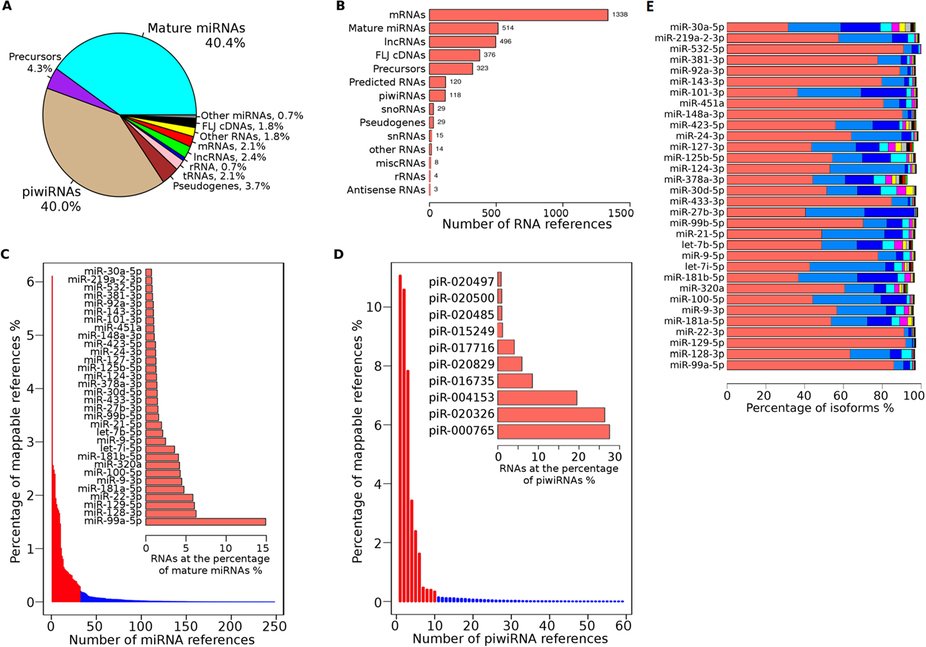