The human body is made of numerous different types of cells, which have small compartments known as organelles to perform complex biochemical reactions. These compartments have multiple enzymes that work together to execute important cellular functions. Researchers at the Center for Soft and Living Matter within the Institute for Basic Science (IBS, South Korea) have successfully mimicked these nano spatial compartments to create ‘artificial mitochondria’ in the latest research published in Nature Catalysis as a cover article. They state the technology can be used to construct artificial organelles that can supply ATP or other useful molecules to cells in damaged or diseased tissues.

This was achieved through reprogramming of ‘exosomes’, which are small vesicles (diameter ~120 nm) that cells use for intercellular signaling. The researchers carried out the experiments using microfluidic droplet reactors, which generated small droplets that were of similar size as typical cells. (diameter ~10 μm) The researchers first aimed to facilitate controlled fusion of these exosomes within the droplets while preventing unwanted fusions.

They accomplished this by tailoring the exosome surfaces with molecules called catechol, which is a chelating agent that forms complexes with metal ions. This was in turn done by attaching the catechol onto antibodies that target specific cell markers, such as CD9. The complex-forming property of catechol allows them to drive fusions between exosomes when they are mixed with metal ions such as Fe3+. The membrane fusion occurs when the catechols on the surfaces bind to the iron and bring the vesicles to close proximity to one another.

Researchers first tested the effectiveness of this system by loading one type of exosomes with calcein-Co2+ and another with EDTA. When the two vesicles fuse and the contents are mixed, EDTA grabs the Co2+ away from calcein, which then allows the latter to fluoresce. The team realized they were successful upon the detection of the fluorescence signal, and the fusion was further confirmed by the doubling of the measured exosome diameter. 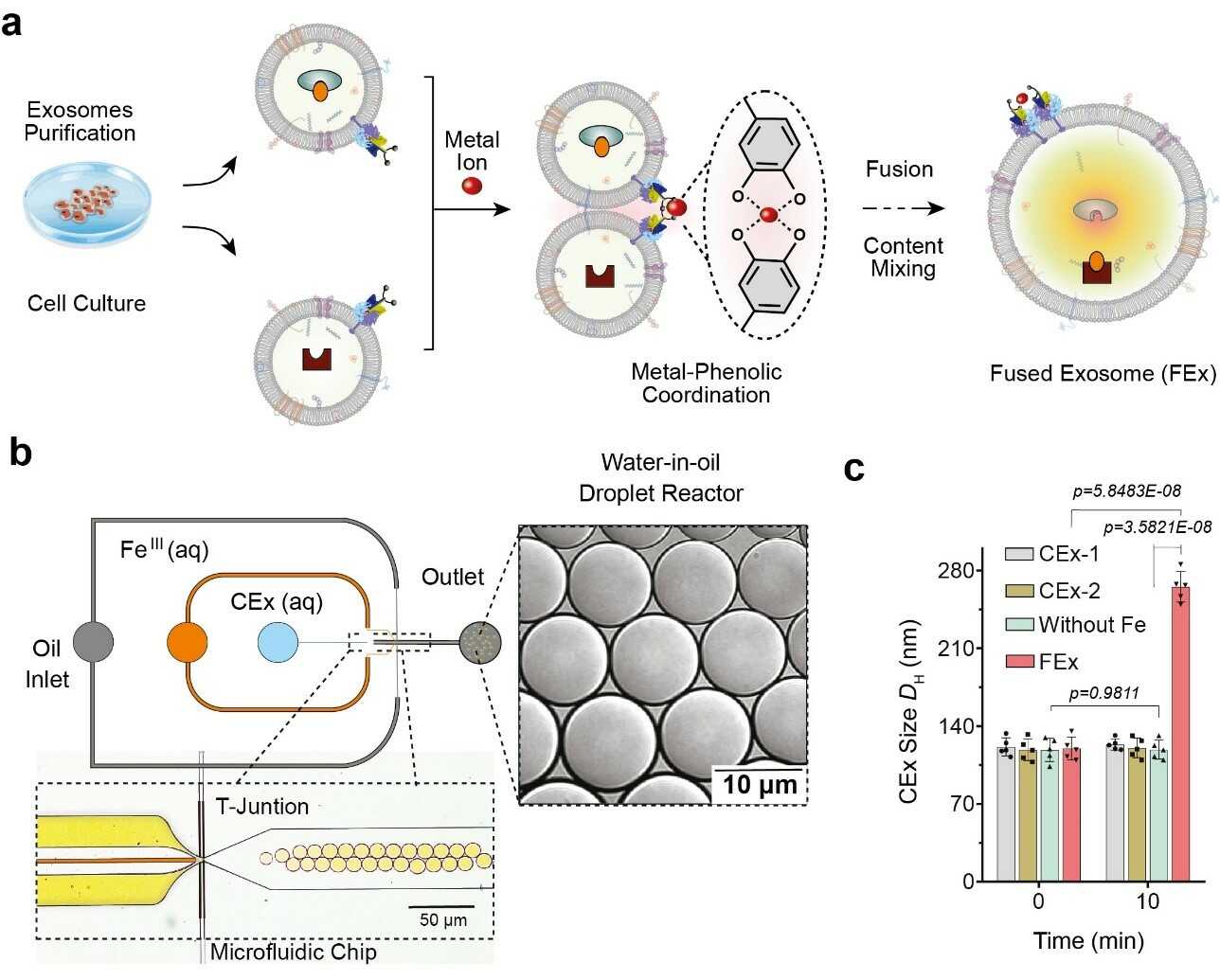 (a)Fe3+ ion triggers membrane fusion in exosomes tailored with catechol (CEx). The formation of a metal-catechol complex brings the exosomes into close proximity and enables fusion. Different reactants in each exosome are then encapsulated together, promoting mixing and triggering reactions inside the fused exosomes (FEx). (b) The microfluidic device designed for generating water-in-oil droplet reactors at the flow-focusing junction. The two aqueous phases (CEx and metal salt) meet and are delivered into the oil stream (1% surfactant PFPE-PEG in FC-40) to break the liquid into droplets. (c) Average size of unfused exosomes (CEx-1: 121 ± 8 nm, CEx-2: 123 ± 5 nm) and fused exosomes (FEx: 265 ± 14 nm).

These customized exosomes were then preloaded with different reactants and enzymes, which turned them into biomimetic nano factories. This allows them to produce high-value biomolecules by performing desired biocatalytic transformations in a spatially confined manner which is not possible using conventional laboratory test tubes. The team demonstrated this multienzyme biocatalytic cascade function by encapsulating glucose oxidase (GOx) and horseradish peroxidase (HRP) inside the exosomes. The GOx first converts glucose into gluconic acid and hydrogen peroxide. The HRP in turn uses the hydrogen peroxide generated in the first reaction to oxidize Amplex Red to a fluorescent product, resorufin. The researchers were even able to take a step further by adding a third enzyme, galactosidase which converts lactose into glucose, into the mix.

Next, the researchers wanted to know exactly how well these mini reactors can be uptaken and internalized by the cells. The cells derived from human breast tissues were fed with fused exosome nanoreactors, and their internalization over the next 48 hours was observed using various markers and a confocal laser scanning microscope (CLSM). It was found that cells were able to uptake these customized exosomes primarily through endocytosis, along with multiple other mechanisms. They further tested the beforementioned GOx-HRP two enzyme system in the cells, and it was found that the fused exosomes were able to successfully manufacture fluorescent products even while being inside the cells.

Armed with this knowledge, the team sought to create functional artificial mitochondria that are capable of producing energy inside the cells. To achieve this, ATP synthase and bo3 oxidase were reconstituted into the earlier exosomes containing GOx and HRP, respectively. These exosomes were in turn fused to create nanoreactors that can produce ATP using glucose and dithiothreitol (DTT). It was found that the fused exosomes were capable of penetrating deep into the core part of a solid spheroid tissue and produce ATP in its hypoxic environment. The activities of these simple organelles were accompanied by marked reduction of reactive oxygen species (ROS) generation. In contrast, free enzymes were unable to penetrate inside these tightly packed spheroids of cells.

“Taken together, our results highlight the potential of these exosomes as nanoreactors in regulating the metabolic activity of cells inside spheroids, and in attenuating cell damage due to hypoxia,” notes CHO Yoon-Kyoung, the corresponding author of the study. It is hoped that further research into such artificial organelles will present a new paradigm in various fields such as disease diagnosis and treatment, biotechnology, medicine, and the environment.

Biological membrane-enclosed organelles are fascinating examples of spatially confined nanoreactors for biocatalytic transformations such as cascade reactions involving multiple enzymes; however, the fabrication of their synthetic mimics remains a considerable challenge.