Circulating cancer exosomes are microvesicles which originate from malignant cells and other organs influenced by the disease and can be found in blood. The exosomal proteomic cargo can often be traced to the cells from which they originated, reflecting the physiological status of these cells. The similarities between cancer exosomes and the tumor cells they originate from exhibit the potential of these vesicles as an invaluable target for liquid biopsies. Researchers from Oregon State University isolated exosomes from the serum of eight osteosarcoma-bearing dogs, five healthy dogs, and five dogs with traumatic fractures. They also characterized exosomes which were collected longitudinally from patients with osteosarcoma prior and 2 weeks after amputation, and eventually upon detection of lung metastasis. Exosomal proteins fraction were analyzed by label-free mass spectrometry proteomics and were validated with immunoblots of selected proteins. Ten exosomal proteins were found that collectively discriminate serum of osteosarcoma patients from serum healthy or fractured dogs with an accuracy of 85%. Additionally, serum from different disease stages could be distinguished with an accuracy of 77% based on exosomal proteomic composition. The most discriminating protein changes for both sample group comparisons were related to complement regulation, suggesting an immune evasion mechanism in early stages of osteosarcoma as well as in advanced disease.

Proteomic analysis of circulating exosomes extracted from osteosarcoma dogs at diagnosis and prior to amputation (DX), at 2 weeks after amputation (PA), and on detection of progressive disease (PD). 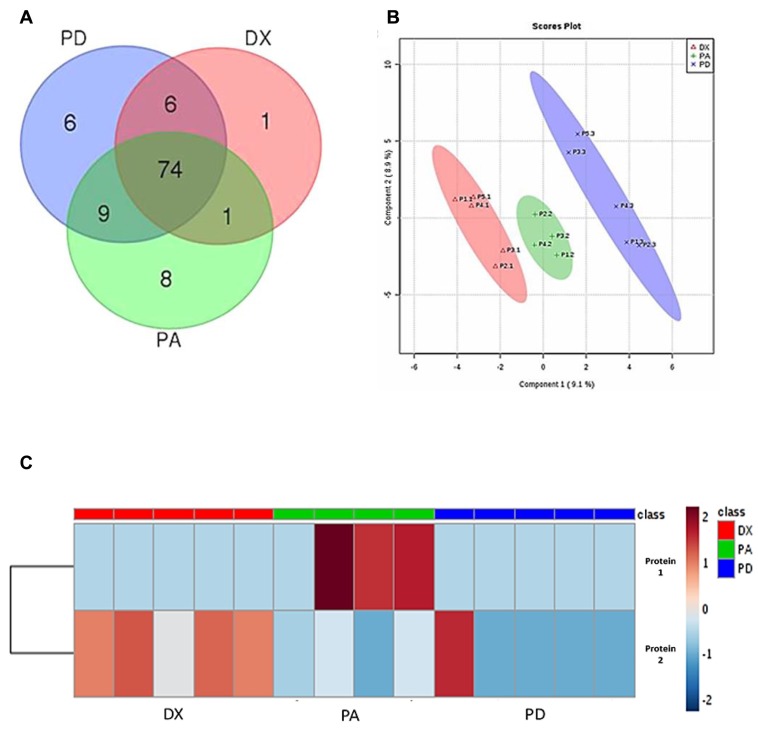 (A) Venn diagram demonstrates the shared and unique proteins for each of the three cohorts. (B) A supervised partial least squares discriminate analysis discriminates the stages of disease into three distinct groups based on proteomic composition isolated from circulating exosomes; each mark (x, +, ∆) represents an individual time point for the same patient. (C) The two most significant proteins for discriminating between exosomes from the different disease stages of OSA are listed along with relative protein expression (red = high, blue = low). Protein 1 is SERPIND1 and protein 2 represents cDNA FLJ78071 which is highly similar to human MHC class III complement component C6.