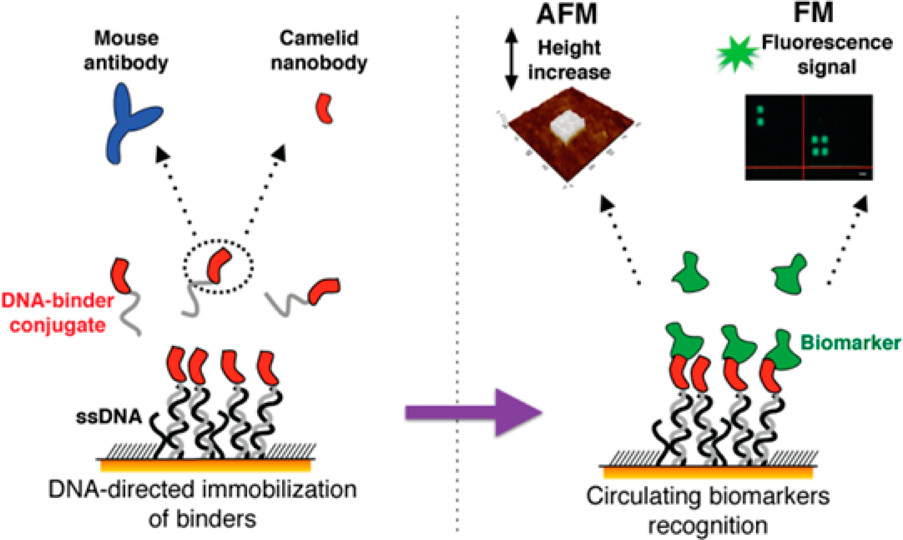 Early detection of cancer plays a crucial role in disease prognosis. It requires the recognition and quantification of low amounts of specific molecular biomarkers, either free or transported inside nanovesicles, through the development of novel sensitive diagnostic technologies. In this context, researchers at Elettra-Sincrotone have developed a nanoarray platform for the noninvasive quantification of cancer biomarkers circulating in the bloodstream. The assay is based on molecular manipulation to create functional spots of surface-immobilized binders and differential topography measurements. It is label-free and requires just a single binder per antigen, and when it is implemented with fluorescence labeling/readout, it can be used for epitope mapping. As a benchmark, they focused on the plasma release of Her2 extracellular domain (ECD), a proposed biomarker for the progression of Her2-positive tumors and response to anticancer therapies. By employing robust, easily engineered camelid nanobodies as binders, they measured ECD-Her2 concentrations in the range of the actual clinical cutoff value for Her2-positive breast cancer. The specificity for Her2 detection was preserved when it was measured in parallel with other potential biomarkers, demonstrating a forthcoming implementation of this approach for multiplexing analysis. Prospectively, this nanorarray platform may be customized to allow for the detection of promising new classes of circulating biomarkers, such as exosomes and microvesicles.