South Korean researchers have developed a technology, which leads protein therapeutics to tumor cells safely and accurately by using light, to treat cancer.

The Korea Advanced Institute of Science and Technology (KAIST) announced on August 9 that its research team led by Choi Chul-hee and Jeong Kyung-sun, professors of the Department of Bio and Brain Engineering, have pulished the new technology in the online version of Nature Communications.

The research team used proteins CRY2 and CIBN that stick to each other when blue light with a wavelength of 450 to 490 nanometers illuminate them. They combined protein therapeutics with CRY2 and exosome, a nanoparticle which is used to deliver protein between cells, with CIBN, and then shot the blue light. In this case, the protein therapeutics and exosomes mingle together as CRY2 and CIBM combine together. In short, it is like guiding customers, or protein therapeutics, who head to the destination of tumor cells with light, and helping them to get on the bus, or exosome, to the destination.

In regard to the new technology, Professor Jeong said, “This is an innovative source technology which can mass produces safe and superior protein therapeutics.” The technology has been transferred to Celex Life Science, a company founded by the KAIST, and the company is currently using it to optimize the manufacturing technology of exosome drugs. 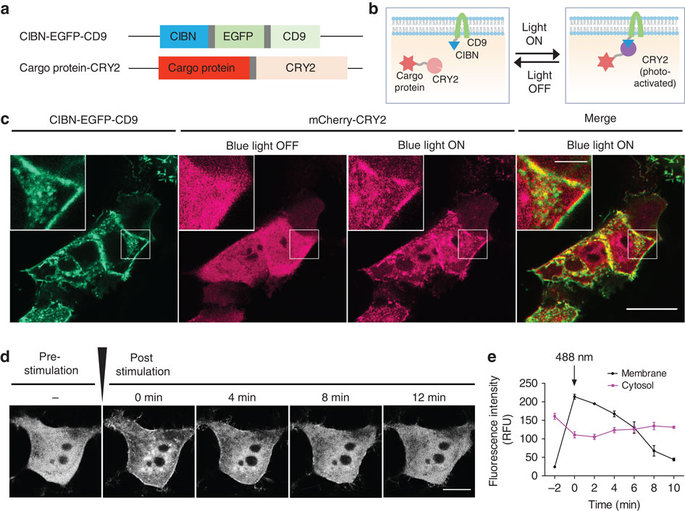 (a) Schematics of DNA constructs used for the production of EXPLOR. (b) Schematic showing fusion proteins and their proposed action. (c) HEK293T cells were transiently transfected with CIBN-EGFP-CD9 and mCherry-CRY2 expression vectors. The mCherry fluorescence was imaged before and after 488-nm laser stimulation (15 s in duration, 350 μW cm−2). Scale bars, 20 μm (5 μm for inset images). A representative result from at least 10 experiments. (d) HEK293T cells transiently transfected with CIBN-EGFP-CD9 and mCherry-CRY2 were imaged for time-lapse imaging of mCherry fluorescence for varying time periods (0–12 min) after a stimulation (black arrow) of 488-nm light (15 s in duration, 350 μW cm−2). Scale bars, 5 μm. A representative result of at least 10 experiments. (e) Quantification of mCherry fluorescence in the cytoplasm and at the plasma membrane. Data are presented as the mean±s.e.m. (n=3).

APE1 shRNA-loaded cancer stem cell-derived extracellular vesicles reverse Erlotinib resistance in non-small cell lung cancer via the IL-6/STAT3 signalling
23 May 2022
Plasma antibodies from humans infected with zoonotic simian foamy virus do not inhibit cell-to-cell transmission of the virus despite binding to the surface of infected cells
23 May 2022
Function and therapeutic development of exosomes for cancer therapy
23 May 2022
HBV induced the discharge of intrinsic antiviral miRNAs in HBV-replicating hepatocytes via extracellular vesicles to facilitate its replication
23 May 2022
Muscle-Derived Beige Adipose Precursors Secrete Promyogenic Exosomes That Treat Rotator Cuff Muscle Degeneration in Mice and Are Identified in Humans by Single-Cell RNA Sequencing
23 May 2022
Candida albicans Hyphal Extracellular Vesicles Are Different from Yeast Ones, Carrying an Active Proteasome Complex and Showing a Different Role in Host Immune Response
23 May 2022
Surface Engineering of Lipid Vesicles Based on DNA Nanotechnology
23 May 2022
Low-dose IL-2 prevents murine chronic cardiac allograft rejection: Role for IL-2-induced T regulatory cells and exosomes with PD-L1 and CD73
23 May 2022