Amyotrophic lateral sclerosis (ALS) is a fatal neurodegenerative disorder which is characterized by progressive degeneration of the motor system. Typically, the disease starts with focal weakness which spreads to involve most muscles and leads to death from respiratory failure within five years of diagnosis. Due to the heterogenic nature of the disease, diagnostics is complex, and it generally takes twelve months from symptom-onset to diagnosis. The discovery of novel biomarkers could lead to accelerated diagnosis, earlier start of treatment, improved patient-segmentation, and treatment follow-up as well as an increased insight into the pathology.

Researchers from Takeda Pharmaceutical analyzed cerebrospinal fluid (CSF) and CSF-derived extracellular vesicles (CSF-EVs) from ALS-patients and matched controls (n = 9 each) using the ultra-sensitive proximity extension assay (PEA), cardiovascular III-panel. On average, 84 and 61 proteins could be detected in CSF and CSF-EVs respectively. In CSF, three proteins were significantly upregulated in ALS-patients (Junctional Adhesion Molecule A Protein, Tumor necrosis factor receptor 2 and Chitinase 1) while myoglobin was down-regulated. In CSF-EVs, no significantly differentially expressed proteins were identified, but there was a trend for downregulation of Perlecan. To the researchers knowledge, only CHIT1 has been previously described as a CSF-based biomarker candidate for ALS. By combining the four differentially expressed markers in CSF and support vector machine algorithm, all ALS patients and 8 of 9 controls were correctly classified. Here, the researchers demonstrated the feasibility of using PEA of CSF and CSF-EVs for biomarker discovery and propose three de novo biomarker candidates for ALS, however, further studies are necessary to demonstrate clinical usability.

Hierarchical clustering of CSF (A) and CSF-EVs (B) 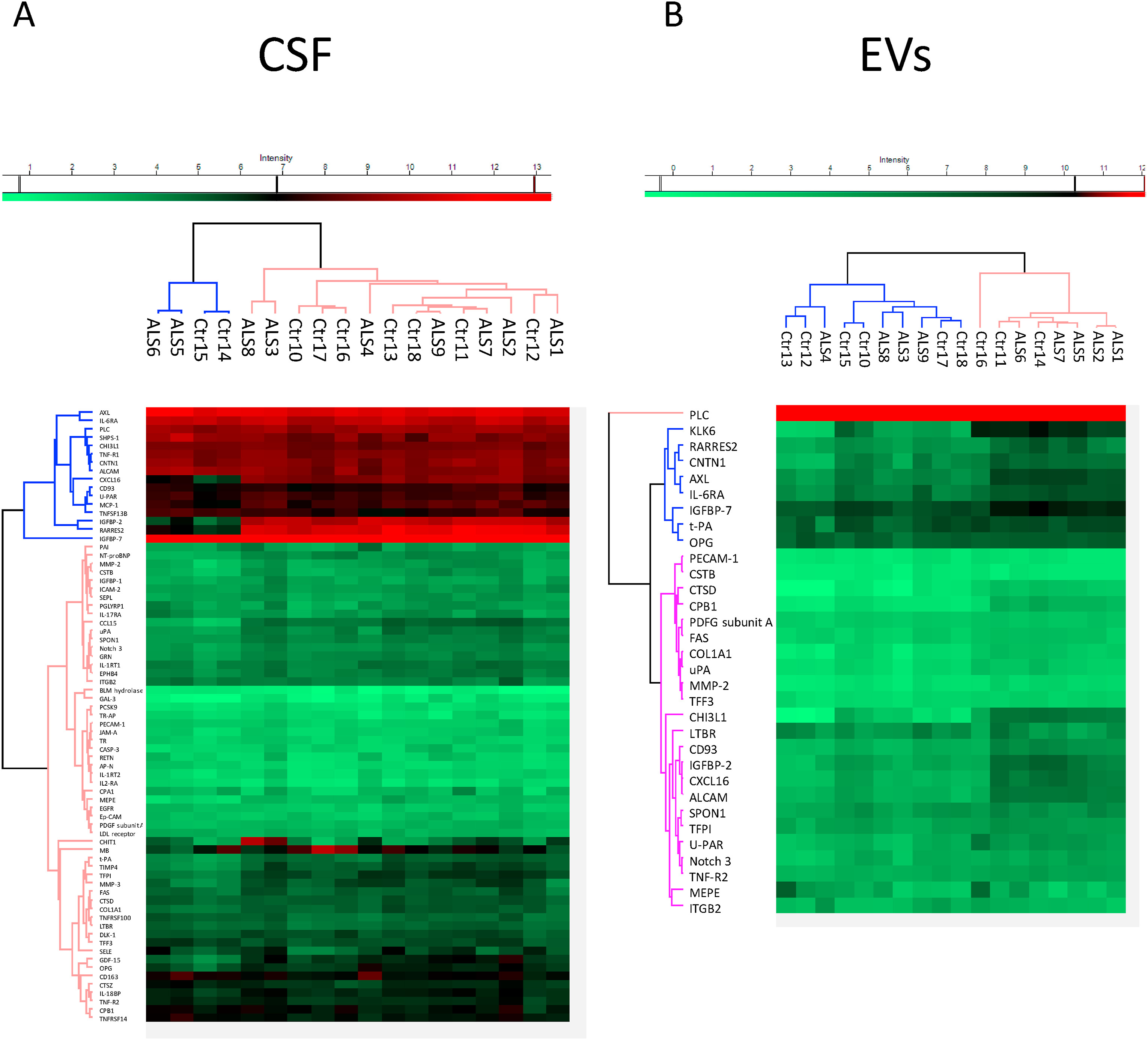 Each row represents a row and each column a sample. The intensity of each signal is represented by the color of the cell, according to the color gradient on top of the image. Only proteins that were detected in all samples of each group are included in the heatmap. (For interpretation of the references to color in this figure legend, the reader is referred to the Web version of this article.)