Researchers at the University of California San Diego discovered that high blood levels of RNA produced by the PHGDH gene could serve as a biomarker for early detection of Alzheimer’s disease. The work could lead to the development of a blood test to identify individuals who will develop the disease years before they show symptoms.

The PHGDH gene produces RNA and proteins that are critical for brain development and function in infants, children and adolescents. As people get older, the gene typically ramps down its production of these RNAs and proteins. The new study, led by Sheng Zhong, a professor of bioengineering at the UC San Diego Jacobs School of Engineering in collaboration with Dr. Edward Koo, a professor of neuroscience at the UC San Diego School of Medicine, suggests that overproduction of a type of RNA, called extracellular RNA (exRNA), by the PHGDH gene in the elderly could provide an early warning sign of Alzheimer’s disease.

“Several known changes associated with Alzheimer’s disease usually show up around the time of clinical diagnosis, which is a little too late. We had a hunch that there is a molecular predictor that would show up years before, and that’s what motivated this study,” Zhong said.

The discovery was made possible thanks to a technique developed by Zhong and colleagues that is sensitive enough to sequence tens of thousands of exRNAs in less than one drop of blood. The method, dubbed SILVER-SEQ, was used to analyze the exRNA profiles in blood samples of 35 elderly individuals 70 years and older who were monitored up to 15 years prior to death. The subjects consisted of 15 patients with Alzheimer’s disease; 11 “converters,” which are subjects who were initially healthy then later developed Alzheimer’s; and 9 healthy controls. Clinical diagnoses were confirmed by analysis of post-mortem brain tissue.

The results showed a steep increase in PHGDH exRNA production in all converters approximately two years before they were clinically diagnosed with Alzheimer’s. PHGDH exRNA levels were on average higher in Alzheimer’s patients. They did not exhibit an increasing trend in the controls, except for in one control that became classified as a converter. 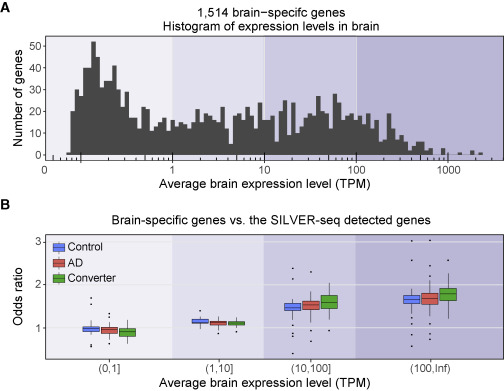 The researchers note some uncertainty regarding the anomalous converter. Since the subject died sometime during the 15-year monitoring, it is unclear whether that individual would have indeed developed Alzheimer’s if he or she lived longer, Zhong said.

The team acknowledges additional limitations of the study.

“This is a retrospective study based on clinical follow-ups from the past, not a randomized clinical trial on a larger sample size. So we are not yet calling this a verified blood test for Alzheimer’s disease,” said co-first author Zixu Zhou, a bioengineering alumnus from Zhong’s lab who is now at Genemo Inc., a startup founded by Zhong. “Nevertheless, our data, which were from clinically collected samples, strongly support the discovery of a biomarker for predicting the development of Alzheimer’s disease.”

In addition to randomized trials, future studies will include testing if the PHGDH biomarker can be used to identify patients who will respond to drugs for Alzheimer’s disease.

The team is also open to collaborating with Alzheimer’s research groups that might be interested in testing and validating this biomarker.

“If our results can be replicated by other centers and expanded to more cases, then it suggests that there are biomarkers outside of the brain that are altered before clinical disease onset and that these changes also predict the possible onset or development of Alzheimer’s disease,” Koo said. “If this PDGDH signal is shown to be accurate, it can be quite informative for diagnosis and even treatment response for Alzheimer’s research.”