Researchers at Tulane University School of Medicine identified a gene that causes an aggressive form of breast cancer to rapidly grow.  More importantly, they have also discovered a way to “turn it off” and inhibit cancer from occurring.  The animal study results have been so compelling that the team is now working on FDA approval to begin clinical trials and has published details in the journal Scientific Reports.

The team led by Dr. Reza Izadpanah examined the role two genes, including one whose involvement in cancer was discovered by Tulane researchers, play in causing triple negative breast cancer (TNBC).   TNBC is considered to be the most aggressive of breast cancers, with a much poorer prognosis for treatment and survival. Izadpanah’s team specifically identified an inhibitor of the TRAF3IP2 gene, which was proven to suppress the growth and spread (metastasis) of TNBC in mouse models that closely resemble humans.

In parallel studies looking at a duo of genes – TRAF3IP2 and Rab27a, which play roles in the secretion of substances that can cause tumor formation – the research teams studied what happens when they were stopped from functioning. Suppressing the expression of either gene led to a decline in both tumor growth and the spread of cancer to other organs.  Izadpanah says that when Rab27a was silenced, the tumor did not grow but was still spreading a small number of cancer cells to other parts of the body. However, when the TRAF3IP2 gene was turned off, they found no spread (known as “metastasis” or “micrometastasis”) of the original tumor cells for a full year following the treatment. Even more beneficial, inhibiting the TRAF3IP2 gene not only stopped future tumor growth but caused existing tumors to shrink to undetectable levels.

“Our findings show that both genes play a role in breast cancer growth and metastasis,” says Izadpanah.  “While targeting Rab27a delays progression of tumor growth, it fails to affect the spread of tiny amounts of cancer cells, or micrometastasis. On the contrary, targeting TRAF3IP2 suppresses tumor growth and spread, and interfering with it both shrinks pre-formed tumors and prevents additional spread. This exciting discovery has revealed that TRAF3IP2 can play a role as a novel therapeutic target in breast cancer treatment.”

“It is important to note that this discovery is the result of a truly collaborative effort between basic science researchers and clinicians.” Izadpanah continued.

Schematic results of the experimental studies I, II and III are displayed 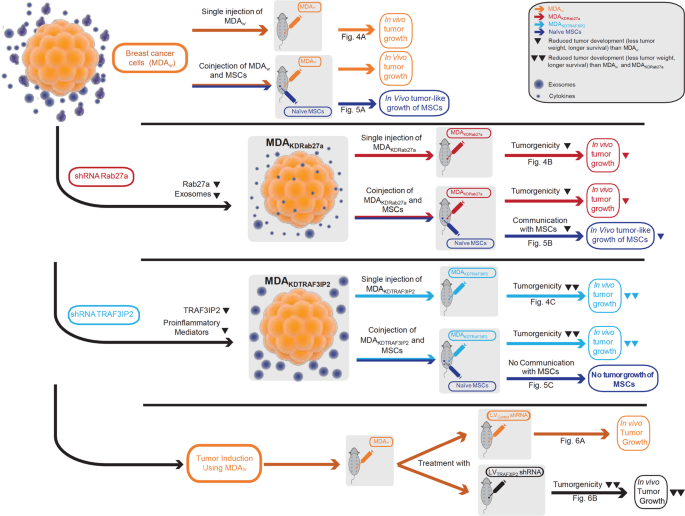 The top row shows the injection pattern of control group with MDAw, which resulted in significant tumor growth. After transduction with Rab27a shRNA we saw a reduction in Rab27a expression and exosome release (indicated by the reduction of large purple circles), resulting in reduced tumor growth of the tumor cells as well as MSC in comparison to MDAw. The third row shows the results of the injection MDAKDTRAF3IP2 in nude mice. Here we see reduced tumor growth in comparison to MDAw and MDAKDRab27a as well as the complete inhibition of communication with MSCs. The bottom row represents experimental series III, where primarily MDAw cells were injected and then treated twice a week with either a lentiviral control (LVControl shRNA) or a lentivirus TRAF3IP2 shRNA (LVTRAF3IP2 shRNA).

Members of the team included Eckhard Alt, David Jansen, Abigail Chaffin, Stephen Braun, Aaron Dumont, Ricardo Mostany and Matthew Burow of Tulane University. Dr. Bysani Chandrasekar of the University of Missouri has joined in the Tulane research efforts and found that targeting TRAF3IP2 can stop the spread of glioblastoma, a deadly brain cancer with limited treatment options. The team is now working on getting FDA approval and hopes to begin clinical trials soon.