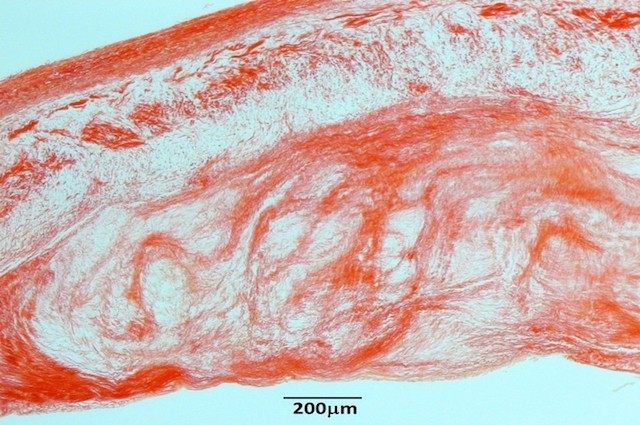 Cross-section of a severely diseased heart valve in a dog with myxomatous mitral valve disease and congestive heart failure.

In their analysis of circulating exosome miRNA (Ex-miRNA), researchers found that the expressions not only change with disease progression and development of heart failure in dogs with myxomatous mitral valve disease but also exhibit changes solely on the basis of aging in dogs. Additionally, they found that Ex-miRNA expression level changes appear to be more specific to disease states than the measure of miRNA from plasma without attention to the isolation of Ex-miRNA. This suggests that Ex-miRNA may offer a novel approach that improves upon current established methods of monitoring patients with heart disease and other diseases, yet relies on readily available samples such as blood and urine.

Myxomatous mitral valve disease (MMVD) in dogs closely resembles mitral valve prolapse (MVP) in humans, which causes disruption and fragmentation of the collagen and elastic fibers within the valves. In dogs, MMVD is the most common acquired cardiac disease and cause of congestive heart failure, making up two-thirds of all cardiac cases. The disease is age-related, and its prevalence in older small breed dogs reaches 100 percent. Previous studies have shown that once in congestive heart failure, dogs have a median survival time between one and nine months.

MVP is a common valvular heart disease occurring in 3 percent of the adult population. Ruptured chordae or poor coaptation of the valve leaflets can lead to mitral regurgitation followed by congestive heart failure. Medical management of mitral regurgitation is limited, and mitral valve repair or replacement is most effective when provided before the onset of congestive heart failure. The mortality rate with surgery ranges from 2-6 percent and is twice as high for the elderly.

“There are currently no medical treatments available to delay the progression of these valvular diseases,” said Vicky Yang, D.V.M., Ph.D., research assistant professor in cardiology and regenerative medicine at Cummings School and first author on the study. “While these new molecular signatures in exosomes require further study, the findings could open doors to novel molecular targets to slow or halt the progression of mitral valve disease to heart failure.”

The study of extracellular vesicles known as exosomes and Ex-miRNA is a relatively new field. Extracellular vesicles are secreted by cells, spreading signals from cell to cell and circulating in blood where they can be harvested for genomic analyses. Exosomes are nanoscale, and circulating exosomes contain small RNA, including miRNA, with unique signatures that reflect cell physiology and pathology.

The first goal of this study was to isolate and identify changes in circulating Ex-miRNA expression levels in dogs with MMVD or MMVD with congestive heart failure (MMVD-CHF) compared to normal, healthy dogs with no cardiac disease. Given that MMVD is strongly age related, researchers also examined the effect of age in control dogs. The second goal was to understand the range of miRNA isolated from Ex-miRNA compared to plasma miRNA, to see if Ex-miRNA are more disease-relevant.

A total of 47 client-owned dogs were enrolled in this study. Each dog received a physical exam and an echocardiographic evaluation. Dogs with observed or history of respiratory signs also received chest radiographs. The dogs were then divided into three groups based on radiographs and echocardiogram: normal healthy dogs, dogs with asymptomatic MMVD, and dogs with MMVD and history of congestive heart failure. Dogs with other systemic diseases were excluded from the study. Whole blood samples were collected from each dog for two types of analysis.

Plasma miRNA was isolated from blood samples of 27 enrolled dogs divided into three groups: normal dogs with no age limit, dogs with asymptomatic MMVD, and dogs with MMVD-CHF.

“These results suggest that Ex-miRNA expression changes may be more specific to disease states than total plasma miRNA,” said Andy Hoffman, D.V.M., Ph.D., professor and director of the Regenerative Medicine Laboratory at Cummings School and corresponding author on the study. “These plasma Ex-miRNAs show great promise as biomarkers for MMVD disease monitoring and may also help us understand the pathophysiology of the disease, and subsequently devise more specific molecular therapies that can halt disease progression.”

Due to some limitations in their study, researchers recommend further evaluation of the candidate circulating Ex-miRNA, including target expression in tissues; gain and loss of function in canine cell lines; biological activity of exosomes and Ex-miRNA on cell lines in vitro; and verification of this candidate Ex-miRNA in patients at varied stages of the disease.

The research was supported by the Shipley Foundation and Tufts Companion Animal Health Fund.