Researchers have discovered a linkage between lipid nanoparticles and extracellular vesicles

A new study published in Nature communications in collaboration between University of Gothenburg and AstraZeneca Sweden, reports the development of alternative vectors of mRNA delivery to cells and organs.

Lipid nanoparticles (LNPs) are the most advanced RNA delivery systems being utilized in clinical trials. In the current study, researchers report that the exogenous chemically modified mRNA encapsulated in LNPs is internalized or endocytosed by cells and is incorporated into Extracellular vesicles  (EVs) via endosomal system.

LNP-derived exogenous mRNA is loaded into EVs and is protected during in vivo delivery, and remains functional for producing the exogenous protein.

The authors delivered a human mRNA and produced a human protein in mice (this protein is absent in mice, and is produced by exogenously delivered mRNA), as a proof of concept that EVs could be used as vehicles of mRNA delivery to express the proteins which are absent in the host, as exemplified herein by human erythropoietin, a secretory protein which stimulates the red blood cell production (erythropoiesis) in the bone marrow, and is used in treating anemic disorders.

A hypothetical mechanism explaining the fate of LNP endosomes 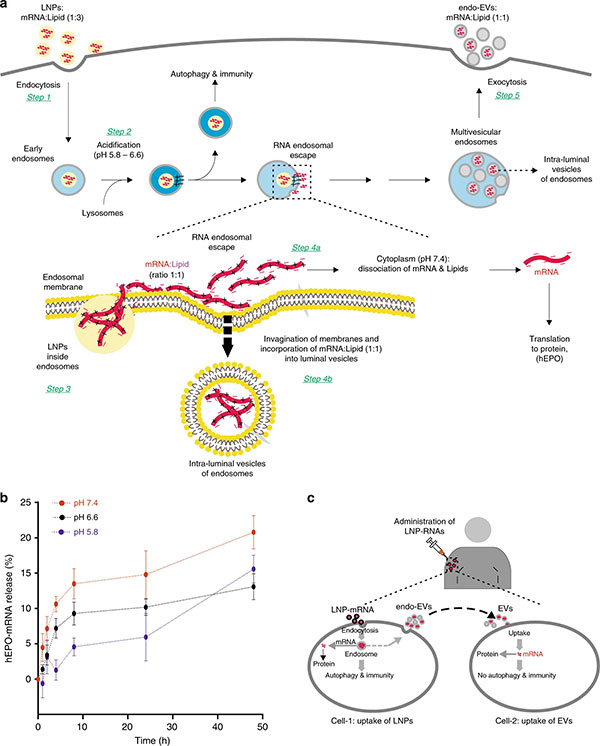 a step 1, 2: after the endocytosis of LNPs, lysosomes fuse with early endosomes and cause the acidification of the endosomal environment (pH 5.5–6.2). a step 3: the surface of LNPs is positively charged, drawing LNPs to the inner membrane of the endosomes, which is negatively charged. This enables the lipid components of LNPs to fuse with the endosomal membrane, allowing the mRNA translocation to the water phase outside the endosomes. Only the mRNA when neutrally charged by ionizable cationic lipids (ratio 1:1 mRNA:lipid) can cross the endosomal membrane. RNA:lipd ratio other than 1:1 would theoretically be unable to cross the endosomal membrane. b In acidic environment (pH 5.8 or 6.6), the mRNA is slightly released from LNPs, whereas at neutral pH (~7.4), the mRNA and lipids are dissociated (The data are shown as standard error of the mean of three replicates). a step 4a: part of the LNP-mRNA that escapes the endosomal membrane and localizes to the cytoplasm could be dissociated from the ionizable lipids because the pH of the cytoplasm is neutral, consistent with the results shown in b). By contrast a step 4b: when LNP-mRNA is transported to the cytoplasmic side of the endosomal membrane, intraluminal vesicles are formed by invagination of the endosomal membrane, and a portion of the LNP-mRNA could be incorporated into these vesicles. a step 4a and 5: since only a 1:1 ratio (neutral) can cross the endosomal membrane and become incorporated into luminal vesicles of endosomes, endo-EVs contained a 1:1 ratio of hEPO mRNA and ionizable lipids. a step 5: the luminal vesicles are then released into the extracellular environment upon the fusion of multivesicular endosomes with the plasma membrane. c Since LNPs with the same ionizable lipids used in this study are currently being utilized in clinical trials and endo-EVs contained hEPO mRNA acquired after the endocytosis of LNPs and delivered to other cells, we postulate that a similar scenario may occur in individuals administered with LNPs, suggesting that part of the mRNA delivery is achieved by such EVs