Researchers at TU Wien have succeeded for the first time in analyzing nanovesicles and proteins in parallel. This is important to determine the quality of a sample and to clearly attribute effects to the transport vesicles. 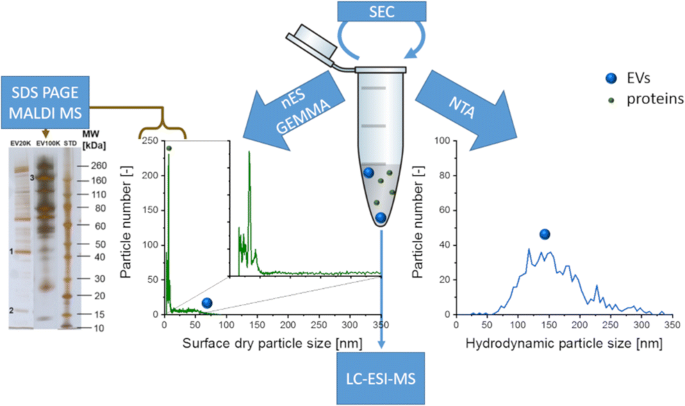 From liposomes to vesicles

In the past, Victor U. Weiss and his team from Martina Marchetti-Deschmann’s research group Mass Spectrometric Bio- and Polymer Analytics already analyzed liposomes produced in the laboratory, which also belong to the group of nanovesicles. Liposomes are used in medicine, among other things, to release encapsulated active ingredients precisely and at the targeted site of action. In contrast to naturally occurring vesicles, so-called extracellular vesicles, the samples are free from protein residues due to their production in the laboratory.

“If one now examines natural nanovesicles, one faces two challenges: The vesicle concentration within the sample is much lower than for liposomes, and the samples are usually impure and contain proteins,” explains Victor U. Weiss.

Although natural-origin samples are purified prior to analysis, not all proteins can always be removed. If these samples are now looked at using conventional methods, these protein impurities often cannot be detected.

“While it is possible to destroy the vesicles before the analysis and thus capture all the proteins in the sample, you don’t know afterwards whether the proteins you are analyzing came from the vesicles or were part of the impurities,” Weiss says.

GEMMA can distinguish between nanovesicles and proteins

In order to clarify the share of vesicles and the share of proteins, the research team used a method that has already proven successful for the analysis of liposomes: gas phase electrophoresis, or GEMMA for short. One of the advantages of the method is that it can be used to measure very small particles, only a few nanometers in size, next to particles up to 200 nanometers diameter.

“Analysing them using GEMMA allows us to sort the particles by size. Later, we not only know what were proteins and what were nanovesicles, we can also count the analytes and make an accurate statement about the composition of the sample,” explains Victor U. Weiss. Weiss also explains why it is important to distinguish between vesicles and proteins in the analysis: “Vesicles not only serve cell communication, they also influence metabolism or the development of cancer. We obtain a large part of our knowledge here from laboratory experiments. However, conventional analyses do not allow us to say whether proteins within a sample are loosely connected to the vesicles and thus also have an influence on these processes, or whether they were simply purified by chance.”

Although gas-phase electrophoresis – as the researchers were able to show – provides valid data, the method is not widely used. One of the reasons for this is probably that for a long time it required a sealed radioactive source to enable size separation.

Therefore, Victor Weiss and his team are also further developing the method itself: “We have already succeeded in replacing the radioactive source very simply with an oscillating corona discharge.”

Because the reliable analysis of nanoparticles is also relevant outside of medicine and the pharmaceutical industry, and is of great interest to the legislature.