For the first time, researchers have determined how toxic tau fibrils spread by the help of brain immune cells called microglia during the early stages of Alzheimer’s disease (AD). The discovery of this new pathway may lead to a therapeutic target for AD, one that has not been previously identified.

In patients with AD, the gradual decline in cognitive function and loss of neurons is preceded by the harmful build-up of the protein tau in the brain. Tau accumulates as tiny fibers called fibrils in brain regions that are critical for learning and memory. But how they spread during the early stage of AD was previously unknown.

“This study found that tau can be carried from one neuron to another by the brain’s own immune cells in a process that may contribute to the progression of AD,” explained corresponding author Tsuneya Ikezu, MD, PhD, professor of pharmacology & experimental therapeutics and neurology at Boston University School of Medicine.

The findings appear online in the journal Nature Neuroscience. 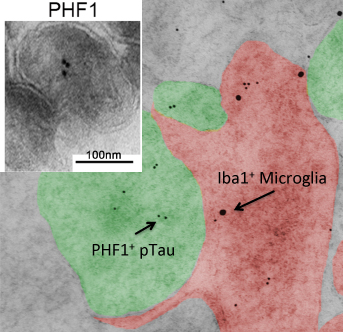 One important function of microglia is to constantly survey the brain environment for sensing and clearing damage and infection. For this purpose, microglia actively engulf dead cells, debris, inactive synapses or even unhealthy neurons. Then, to transfer signaling molecules and present antigen to activate an immune response, microglia release nano-scale particles called exosomes, which can be taken up by other cells.

The researchers hypothesize that in an early stage of AD brain, microglia may spread the harmful protein tau by taking up tau-containing fibrils and then releasing them via the exosomes, which can be absorbed by nearby neurons.

Using an experimental model, the researchers found that pharmacologic depletion of microglia suppressed the spread of tau from one brain region to another. The depletion of microglia also restored the neural excitation, which is affected by the spread of tau. They also found that pharmacologic inhibition of exosome production suppressed the tau spread in the brain.

“Our results using an experimental model of AD suggest that microglia could facilitate the spread of tau fibrils between neurons by releasing tau-containing exosomes. This finding indicates that molecules involved in exosome release by microglia has a great potential as novel therapeutic targets to prevent the progression of AD,” added Ikezu.