Exosomes are promising disease diagnostic markers and drug delivery vehicles, although their use in practice is limited by insufficient homogeneous quantities that can be produced. Researchers from RMIT University reveal that exposing cells to high frequency acoustic irradiation stimulates their generation without detriment to cell viability by exploiting their innate membrane repair mechanism, wherein the enhanced recruitment of calcium ions from the extracellular milieu into the cells triggers an ESCRT pathway known to orchestrate exosomal production. Given the high post-irradiation cell viabilities (≈95%), the researchers were able to recycle the cells through iterative irradiation and post-excitation incubation steps, which facilitates high throughput production of a homogeneous population of exosomes—a particular challenge for translating exosome therapy into clinical practice. In particular, these researchers show that approximately eight- to ten-fold enrichment in the number of exosomes produced can be achieved with just 7 cycles over 280 mins, equivalent to a yield of around 1.7–2.1-fold/h. 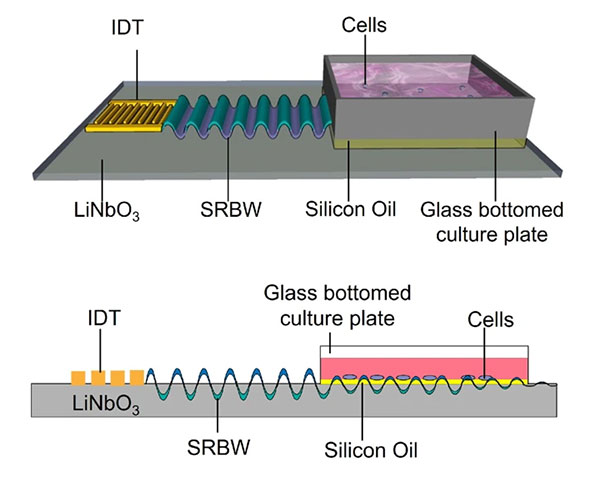 Perspective and side view schematics of the experimental set-up in which the SRBW (not to scale), generated along a piezoelectric lithium niobate (LiNbO3) substrate by applying an AC electric signal at the device’s resonant frequency (10 MHz) to an interdigitated transducer electrode (IDT) photolithographically patterned on the substrate, is coupled through a thin layer of silicon oil into a glass-bottom culture plate containing the adherent cells to stimulate their production of exosomes.