Extracellular vesicles (EVs) are nanosized particles released by all cells that have been heralded as novel regulators of cell-to-cell communication. It is becoming increasingly clear that in response to a variety of stress conditions, cells employ EV-mediated intercellular communication to transmit a pro-survival message in the tumor microenvironment and beyond, supporting evasion of cell death and transmitting resistance to therapy. Understanding changes in EV cargo and secretion pattern during cell stress may uncover novel, targetable mechanisms underlying disease progression, metastasis and resistance to therapy. Further, the profile of EVs released into the circulation may provide a circulating biomarker predictive of response to therapy and indicative of microenvironmental conditions linked to disease progression, such as hypoxia. Continued progress in this exciting and rapidly expanding field of research will be dependent upon widespread adoption of transparent reporting standards and implementation of guidelines to establish a consensus on methods of EV isolation, characterisation and nomenclature employed. 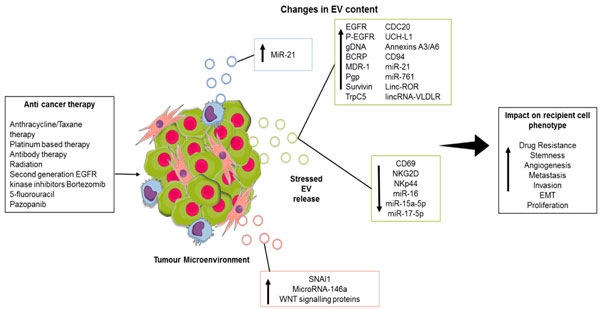