microRNAs (miRNAs), a class of short, non-coding RNA can be found in a highly stable, cell-free form in mammalian body fluids. Specific miRNAs are secreted by parasitic nematodes in exosomes and have been detected in the serum of murine and dog hosts infected with the filarial nematodes Litomosoides sigmodontis and Dirofilaria immitis, respectively. Here researchers from the University of Edinburgh identify extracellular, parasite-derived small RNAs associated with Onchocerca species infecting cattle and humans.

Small RNA libraries were prepared from total RNA extracted from the nodule fluid of cattle infected with Onchocerca ochengi as well as serum and plasma from humans infected with Onchocerca volvulus in Cameroon and Ghana. Parasite-derived miRNAs were identified based on the criteria that sequences unambiguously map to hairpin structures in Onchocerca genomes, do not align to the human genome and are not present in European control serum.

A total of 62 mature miRNAs from 52 distinct pre-miRNA candidates were identified in nodule fluid from cattle infected with Onchocerca ochengi of which 59 are identical in the genome of the human parasite Onchocerca volvulus. Six of the extracellular miRNAs were also identified in sequencing analyses of serum and plasma from humans infected with O. volvulus. Based on sequencing analysis the abundance levels of the parasite miRNAs in serum or plasma range from 5 to 127 reads/per million total host miRNA reads identified, comparable to our previous analyses of Schistosoma mansoni and L. sigmodontis miRNAs in serum. All six of the O. volvulus miRNAs identified have orthologs in other filarial nematodes and four were identified in the serum of mice infected with L. sigmodontis. 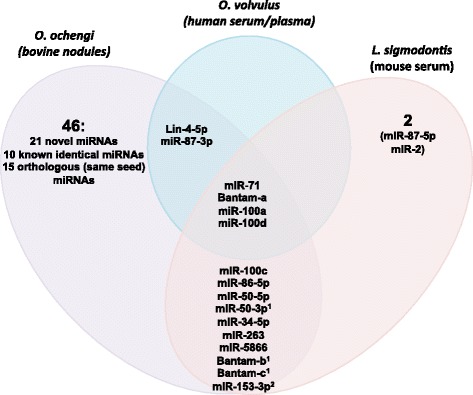 This research team has identified parasite-derived miRNAs associated with onchocerciasis in cattle and humans. These results confirm the conserved nature of RNA secretion by diverse nematodes. Additional species-specific small RNAs from O. volvulus may be present in serum based on the novel miRNA sequences identified in the nodule fluid. In our analyses comparison to European control serum illuminates the scope for false-positives, warranting caution in criteria that should be applied to identification of biomarkers of infection.