Hepatocellular carcinoma (HCC) is the most common primary liver tumor with an increasing global incidence. In 2018, HCC was the sixth most frequently diagnosed cancer and the fourth leading cause of cancer-related death worldwide. Sorafenib is the first FDA-approved targeted therapy for advanced HCC. A previous study showed that sorafenib prolonged the median overall survival (OS) by 2.3−3 months in advanced HCC patients that did not qualify for liver transplantation or resection. However, sorafenib resistance in HCC is usually observed within 6 months of treatment, thereby making the follow-up therapy rather formidable. 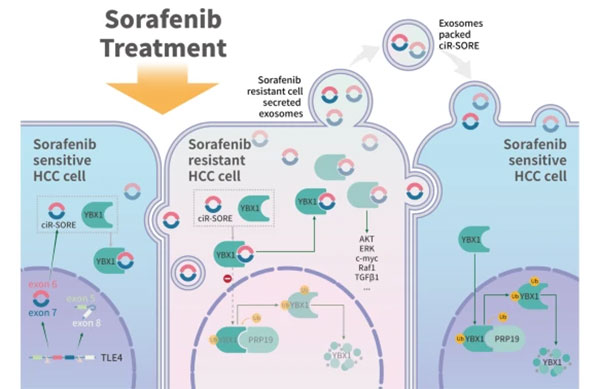 There are various pathways of protein degradation in the human body, such as the lysosomal pathway, the ubiquitin-proteasome pathway and the caspase degradation pathway. Then how on earth can a circular RNA increase the degradation of YBX1? This question had baffled the research team for a long time until they observed a subtle difference in the protein profile after the binding of knockdown circRNA-SORE and YBX1 and verified it in meticulously designed experiments. Upon knockdown of circRNA-SORE, the interactions between Pre-MRNA Processing Factor (PRP19) and YBX1 increased. The PRP19 complex, a ubiquitin ligase, mediates protein degradation through the ubiquitin proteasome pathway. Experiments suggested that PRP19-mediated YBX1 ubiquitination and degradation is involved in the circRNA-SORE-YBX1 regulation.

“In line with these findings, we found that circRNA-SORE is enriched and transmitted by exosomes, enabling the spread of sorafenib resistance among HCC cells,” said CAI Xiujun. “The stable properties of exosomes and circRNAs may make exosome-carrying-circRNA-SORE a promising biomarker in liquid biopsy for the early detection and noninvasive surveillance of HCC.”