A group of scientists led by Ramkumar Menon at The University of Texas Medical Branch at Galveston have gained new insight on a poorly-understood key player in the timing of labor and delivery. This new information brings scientists closer to being able to prevent preterm births. This study is in Scientific Reports.

According to the World Health Organization, an estimated 15 million infants are born too early each year. Complications from preterm birth are the leading cause of death among children under five years old, responsible for about one million deaths each year globally. In the U.S., approximately 1 of every 10 infants was born prematurely in 2017.

When a woman is at the end of her pregnancy, the normal childbirth process begins when the fetus releases chemicals signaling that his/her organs have matured enough for delivery. This chemical release shifts the mother’s hormone levels, which increases inflammation in the uterus and begins labor and delivery.

“There’s another component of the biological clock that contributes to the timing of birth – a type of cell-to-cell communication between the maternal and fetal cells called paracrine signaling,” said senior author Menon, UTMB associate professor in the department of obstetrics and gynecology. “Because little is known about what this type of signaling does during pregnancy, we investigated the role of paracrine signals called exosomes in the timing of labor and delivery.”

The researchers collected blood plasma samples from pregnant mice and isolated the exosomes. Exosomes collected during either early or late pregnancy were injected into a separate group of pregnant mice during the human equivalent of the beginning of the third trimester.

“We showed that injecting a high concentration of late pregnancy exosomes was able to cause labor-associated changes without the other hormonal and chemical triggers usually involved in this process. Injections of the early pregnancy exosomes had no effect,” said Menon. “This shows that exosomes play a more important role in labor and delivery that has never been reported before.”

UTMB’s Samantha Sheller-Miller, the primary author of this work, conducted the animal model experiments that produced this novel finding. Other authors include UTMB’s Jayshil Trivedi as well as Steven Yellon from Loma Linda University. 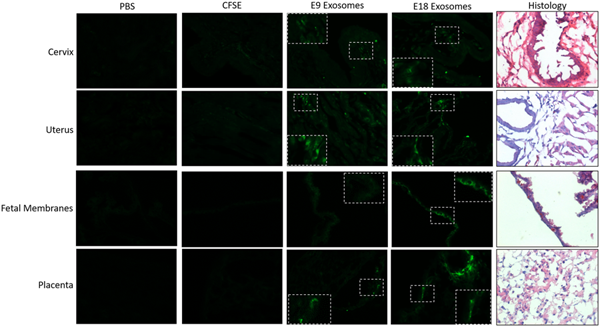 Exosomes fluorescently labeled with carboxyfluorescein succinimidyl ester (CFSE), as well as PBS and CFSE in PBS (7.5 µM) were injected into mice on E15. Maternal and fetal tissues were collected and analyzed for fluorescent signal emerging from exosomes. PBS- and CFSE-injected mice show no fluorescent signals, while fluorescent signals from labeled exosomes (E9 and E18; green) can be seen in both maternal and fetal tissues tested. The inset is an enlargement of the tissue area marked by white boxes. Histology panel is representative H&E staining for orientation and localization. All images were taken at 40x magnification.

Source – The University of Texas Medical Branch at Galveston