The finding can reveal how protein transport goes awry in conditions including Alzheimer’s and autism. 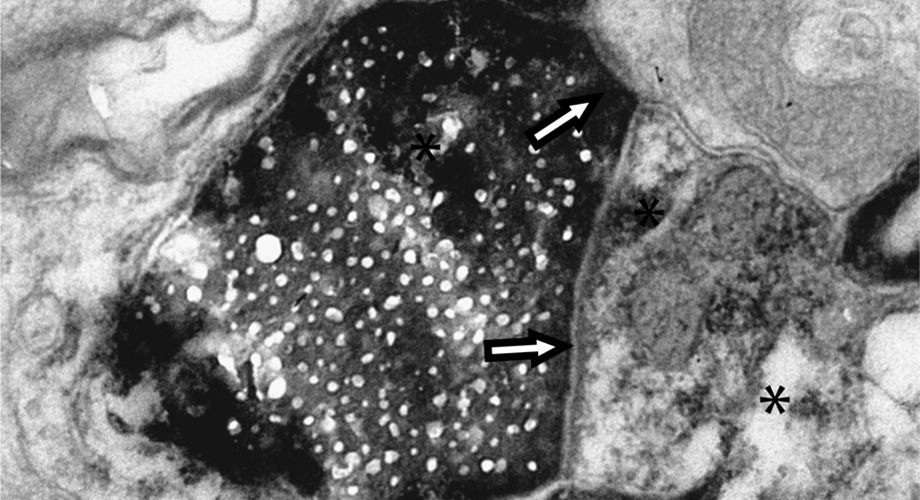 Scripps Research scientists tracked proteins tagged with biotin (black areas of this electron microscopy image) from retinal cells (pictured) to the visual cortex of the brain.

Scientists at Scripps Research have discovered hundreds of proteins that are constantly transported throughout the healthy brain in small membrane-enclosed sacs, revealing a new form of communication between brain cells. The findings, published this week in the journal Cell Reports, could help scientists better understand neurological conditions, including Alzheimer’s and autism.

“This is an entirely new way that cells in the brain can communicate with one another that has never before been integrated into how we think about health and disease,” says Hollis Cline, PhD, Hahn Professor of Neuroscience at Scripps Research. “It opens up a lot of exciting avenues of research.”

To send signals throughout the brain, neurons typically communicate using chemicals called neurotransmitters, which move from one cell to an adjacent one. Hormones also circulate through the brain, affecting the growth of brain cells and helping forge new connections between neurons.

Previously, researchers had suspected that a small number of proteins may move more independently around the brain in isolated instances. For example, scientists studying Alzheimer’s disease found that synuclein and tau—two proteins associated with neurodegeneration—could move between cells in the brains of animals affected by Alzheimer’s. But they were not sure if this was related to the disease itself. Other teams have provided evidence that a protein originating from one cell can later be found in another; they could not eliminate the possibility, however, that the protein was disassembled into its amino acid building blocks and later reassembled in the destination cell.

In the new work, Cline and her colleagues used a method of labeling proteins that ensured they only tracked proteins that stay intact. The tag, a biotin molecule, cannot be reintegrated into new proteins if the proteins are disassembled. The research team introduced the tag into retinal ganglion cells in the eyes of rats. Eleven days later, they examined cells from the visual cortex, an area of the brain responsible for processing vision and physically distant from the retinal ganglion cells.

Cline’s team next isolated any protein in the visual cortex that was tagged with biotin. They found more than 200 proteins and collaborated with Scripps Research professor John Yates III, PhD, to identify each protein using mass spectrometry.

“Previous methods didn’t allow researchers to identify specific proteins being transported or watch the process at an ultrastructural level,” says Lucio Schiapparelli, first author of the new paper and a former staff scientist at Scripps Research now at Duke University. “So, using this new combination of protein tagging and identification strategies allowed us to make headway in really understanding what was happening with these proteins.”

The proteins identified included many with known functions in the brain, including the tau and synuclein seen moving between cells in Alzheimer’s disease.

“This is a confirmation that in the healthy brain, tau and synuclein—and their movement around the brain—is normal,” says Cline. “But with Alzheimer’s disease it’s a toxic form of the protein that is transported between neurons.”

The researchers also used a different set of protein tags to show that, in most cases, these proteins were being transported between cells inside exosomes—small, membrane-enclosed compartments packed with proteins, like suitcases packed with clothes. This discovery can help pave the way for other researchers who want to follow protein movements in other areas of the brain, as well as compare interneuronal protein transport in healthy versus diseased brains. While the new work was carried out in the visual system, Cline says there’s no reason not to think the results are further reaching.

“There are likely proteins being shuttled around in this mechanism all throughout the brain,” she says. “What I really hope is that this spurs new interest in exploring the roles of intercellular communication that we had not known about until now.”

Hydrogel Nanoarchitectonics: An Evolving Paradigm for Ultrasensitive Biosensing
27 May 2022
Immunomodulatory Potential of Human Mesenchymal Stem Cells and their Exosomes on Multiple Sclerosis
27 May 2022
Effect of Extracellular Vesicles From Multiple Cells on Vascular Smooth Muscle Cells in Atherosclerosis
27 May 2022
Protective Signature of IFNγ-Stimulated Microglia Relies on miR-124-3p Regulation From the Secretome Released by Mutant APP Swedish Neuronal Cells
27 May 2022
Matrix stiffness mediates pancreatic cancer chemoresistance through induction of exosome hypersecretion in a cancer associated fibroblasts-tumor organoid biomimetic model
27 May 2022
Basic points to consider regarding the preparation of extracellular vesicles and their clinical applications in Japan
27 May 2022
Improved Aitongxiao prescription (I-ATXP) induces apoptosis, cell cycle arrest and blocks exosomes release in hepatocellular carcinoma (HCC) cells
27 May 2022
SERUM EXTRACELLULAR VESICLES FOR DELIVERY OF CRISPR-CAS9 RIBONUCLEOPROTEINS TO MODIFY THE DYSTROPHIN GENE
27 May 2022