Selective sorting of microRNAs into exosomes

Exosomes may mediate cell-to-cell communication by transporting various proteins and nucleic acids to neighboring cells. Some protein and RNA cargoes are significantly enriched in exosomes. How cells efficiently and selectively sort them into exosomes remains incompletely explored. Previously we reported that YBX1 is required in sorting of miR-223 into exosomes. Researchers at the University of California, Berkeley show that YBX1 undergoes liquid-liquid phase separation (LLPS) in vitro and in cells. YBX1 condensates selectively recruit miR-223 in vitro and into exosomes secreted by cultured cells. Point mutations that inhibit YBX1 phase separation impair the incorporation of YBX1 protein into biomolecular condensates formed in cells, and perturb miR-233 sorting into exosomes. They propose that phase separation-mediated local enrichment of cytosolic RNA binding proteins and their cognate RNAs enables their targeting and packaging by vesicles that bud into multivesicular bodies. This provides a possible mechanism for efficient and selective engulfment of cytosolic proteins and RNAs into intraluminal vesicles which are then secreted as exosomes from cells. 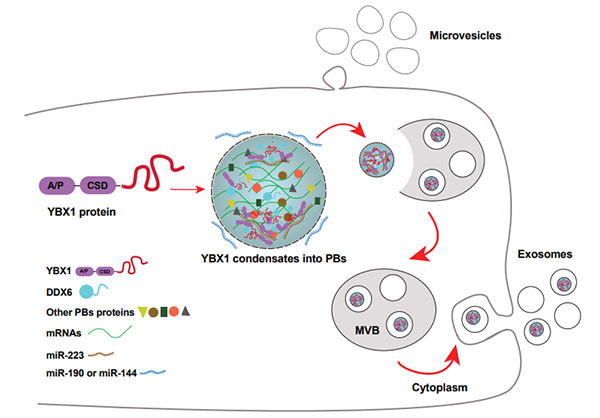