Although it is specific for prostatic tissue, serum prostate-specific antigen (PSA) screening has resulted in an over-diagnosis of prostate cancer (PCa) and many unnecessary biopsies of benign disease due to a well-documented low cancer specificity, thus improvement is required.

IDIBELL researchers profiled the expression level of miRNAs contained in semen exosomes from men with moderately increased PSA levels to assess their usefulness, either alone or in addition to PSA marker, as non-invasive biomarkers, for the early efficient diagnosis and prognosis of PCa. An altered miRNA expression pattern was found by a high throughput profiling analysis in PCa when compared with healthy individuals (HCt) exosomal semen samples. The presence of vasectomy was taken into account for the interpretation of results. Fourteen miRNAs were selected for miRNA validation as PCa biomarkers in a subsequent set of semen samples.

In this explorative study, researchers describe miRNA-based models, which included miRNA expression values together with PSA levels, that increased the classification function of the PSA screening test with diagnostic and/or prognostic potential to discriminate PCa from BPH and to discriminate between GS ≥ 7 tumours and men presenting with no cancer or GS6 tumours. The pathway analysis of predicted miRNA target genes supports a role for these miRNAs in PCa aetiology and/or progression. This study shows semen exosome miRNA-based models as molecular biomarkers with the potential to improve PCa diagnosis/prognosis efficiency. As the next step, further prospective studies on larger cohorts of patients are required to validate the diagnostic and/or prognostic role of the miRNA panel before it could be adopted into clinical practice. 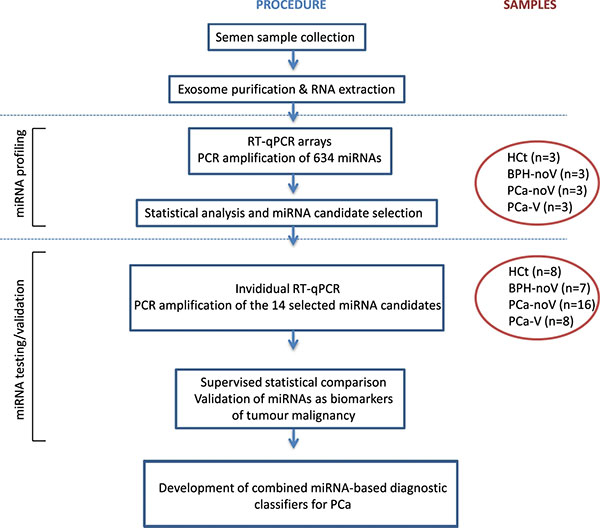 Flow chart representing the two stages design study. The number of miRNAs and individuals analysed in each work-procedure stage are depicted.