Milk is not only a composite of nutrients but emerged as a source of exosomes acting as a promising drug delivery vehicle for siRNA. siRNA is known for its immense therapeutic potential but has various physiological limitations including stable delivery. To investigate the suitability of siRNA for physiological stability and oral delivery, researchers at the National Dairy Research Institute, India encapsulated scrambled AF-488 siRNA in milk whey exosomes using lipofection and evaluated stability against the digestive processes along with their uptake and trans-epithelial transport by intestinal epithelial cells. Milk exosomal siRNA were found resistant to different digestive juices including saliva, gastric, bile and pancreatic juice in vitro and were internalized by Caco-2 cells. The stable delivery of exosomal-AF488 siRNA along with their trans-epithelial transport was confirmed by fluorescence microscopy and fluorescence intensity measurements. In summary, the encapsulation of siRNA in milk exosomes resists harsh digestive processes, improved intestinal permeability and payload protection. 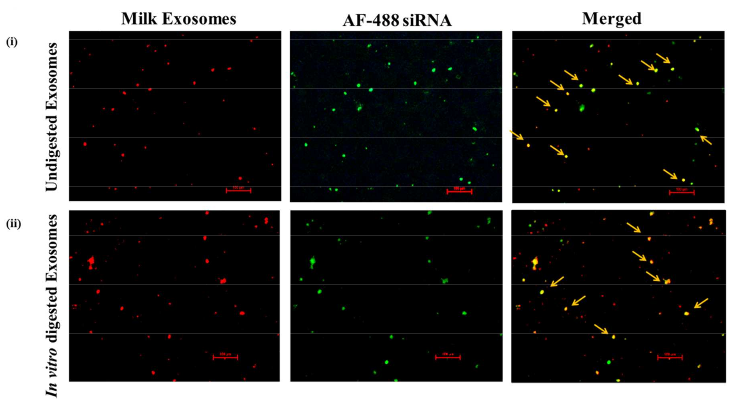