Individuals with Down syndrome (DS) exhibit Alzheimer’s disease (AD) pathology at a young age, including amyloid plaques and neurofibrillary tangles (NFTs). Tau pathology can spread via extracellular vesicles, such as exosomes. The cargo of neuron-derived small extracellular vesicles (NDEVs) from individuals with DS contains p-Tau at an early age. The goal of the study was to investigate whether NDEVs isolated from the blood of individuals with DS can spread Tau pathology in the brain of wildtype mice. University of Denver researchers purified NDEVs from the plasma of patients with DS-AD and controls and injected small quantities using stereotaxic surgery into the dorsal hippocampus of adult wildtype mice. Seeding competent Tau conformers were amplified in vitro from DS-AD NDEVs but not NDEVs from controls. One month or 4 months post-injection, the researchers examined Tau pathology in mouse brains. They found abundant p-Tau immunostaining in the hippocampus of the mice injected with DS-AD NDEVs compared to injections of age-matched control NDEVs. Double labeling with neuronal and glial markers showed that p-Tau staining was largely found in neurons and, to a lesser extent, in glial cells and that p-Tau immunostaining was spreading along the corpus callosum and the medio-lateral axis of the hippocampus. These studies demonstrate that NDEVs from DS-AD patients exhibit Tau seeding capacity and give rise to tangle-like intracellular inclusions. 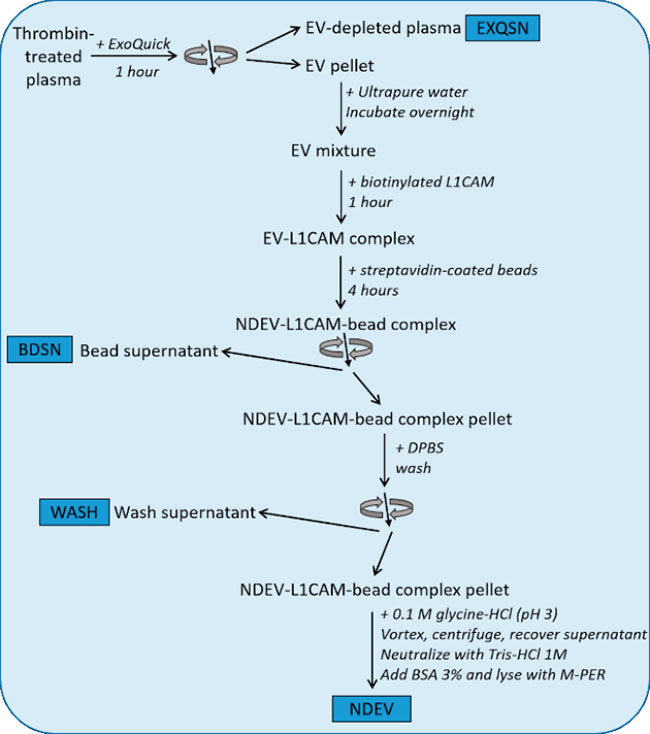 Thrombin-treated plasma was first processed with ExoQuick polymer reagent, whereafter the EV-depleted plasma (EXQSN) was collected. The EV pellets were then mixed with L1CAM biotinylated antibody, then streptavidincoated beads. The bead supernatant (BDSN) was collected for biomarker analyses and the bead complex was next washed with Dulbecco’s Phosphate Buffered Saline (DPBS) (WASH was collected). Neuron-derived small extracellular vesicles (NDEVs) were then recovered from the mix. Exosome-related proteins and neuron-specific proteins were measured at each step of the isolation procedure.