Leishmania use exosomes to communicate with their mammalian hosts and these secreted vesicles appear to contribute to pathogenesis by delivering protein virulence factors to macrophages. In other eukaryotes, exosomes were found to carry RNA cargo, such as mRNAs and small non-coding RNAs, capable of altering recipient cell phenotype. Whether leishmania exosomes also contain RNAs which they are able to deliver to bystander cells is not known. Here, a team led by researchers from University of British Columbia and Simon Fraser University show that leishmania exosomes indeed contain RNAs and compare and contrast the RNA content of exosomes released by Leishmania donovani and Leishmania braziliensis.on-coding rnas

The researchers purified RNA from exosomes collected from axenic amastigote culture supernatant and found that when compared with total leishmania RNA, exosomes mainly contained short RNA sequences. Exosomes with intact membranes were capable of protecting their RNA cargo from degradation by RNase. Moreover, exosome RNA cargo was delivered to host cell cytoplasm in vitro. Sequencing of exosomal RNA indicated that the majority of cargo sequences were derived from non-coding RNA species such as rRNA and tRNA. In depth analysis revealed the presence of tRNA-derived small RNAs, a novel RNA type with suspected regulatory functions. Northern blotting confirmed the specific and selective enrichment of tRNA-derived small RNAs in exosomes. The team also identified a number of novel transcripts, which appeared to be specifically enriched in exosomes compared to total cell RNA. In addition, they observed the presence of sequences mapping to siRNA-coding regions in L. braziliensis , but not in L. donovani exosomes. 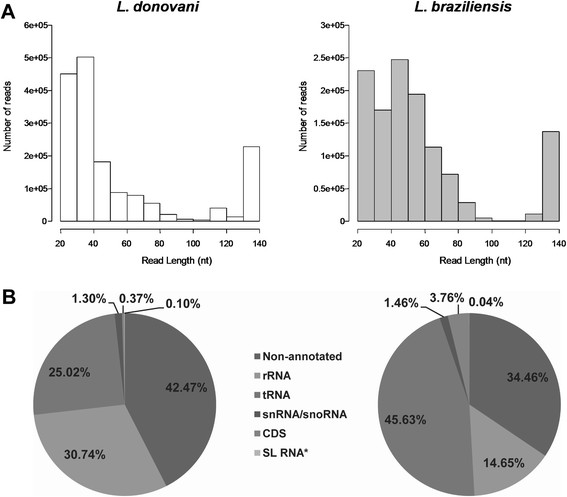 These results show that leishmania exosomes are selectively and specifically enriched in small RNAs derived almost exclusively from non-coding RNAs. These exosomes are competent to deliver their cargo of novel, potential small regulatory RNAs to macrophages where they may influence parasite-host cell interactions. The remarkably high degree of congruence in exosomal RNA content between L. donovani and L. braziliensis, argues for the presence of a conserved mechanism for exosomal RNA packaging in leishmania. These findings open up a new avenue of research on non-canonical, small RNA pathways in this trypanosomatid, which may elucidate pathogenesis and identify novel therapeutic approaches.