Sortilin mediates the release and transfer of exosomes

The transfer of exosomes containing both genetic and protein materials is necessary for the control of cancer cell microenvironment to promote tumor angiogenesis. The nature and function of proteins found in the exosomal cargo, their mechanisms in membrane transport and related signaling events are not clearly understood.

In this study, researchers from the Université de Limoges demonstrate in human lung cancer A549 cells, that the exosome release mechanism is closely linked to a multifaceted receptor, neurotensin (NT) receptor-3 also called sortilin. Sortilin is already known to be important for cancer cell function. Here, they report for the first time its role in the assembly of a tyrosine kinase complex and subsequent exosome release. This novel complex (TES complex) found in exosomes results in the linkage of two tyrosine kinase receptors, TrkB and EGFR with sortilin. Using in vitro models, the researchers demonstrate that this complex containing sortilin exhibits a control on endothelial cells and angiogenesis activation through exosome transfer. 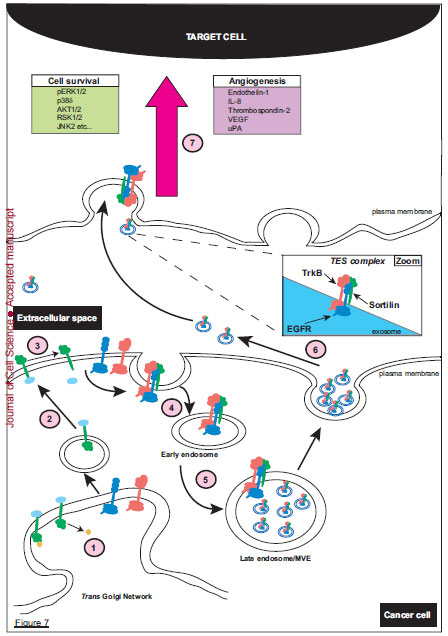